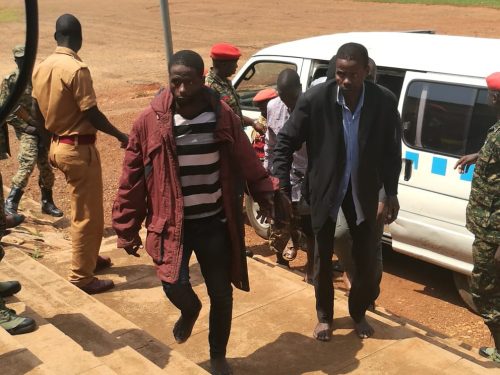 Its alleged that the seven and others still at large, on 1st July attacked Mawogola street in Masaka and killed Moses Musinguzi and Shafiq Kigunddu. They are also accused of aggravated robbery, where they robbed Moses Musinguzi for SMG rifle and 30 rounds of ammunition on the same day.

The group is also accused of robbing the Masaka based business man Moses Kalungi popularly know as Muto for over 435 million shillings.

They all pleaded not guilty of the four charges levied against them and their lawyer Captain Sekayita asked court to order treatment of the suspects who looked to be tortured and some were struggling to walk which the court assured.

The prosecution led by Major Raphael Mugisha informed court that inquiries in the matter are still press mature and more arrests are yet to be done.

In the same court, the prosecution led by captain Samuel Masereje opposed the bail application of two Kitatta’s co-accused Joel Kibirige and Ibra Sekajja who are members of boda boda 2010 on grounds that they will interfere with evidence. The court chairperson Lt Gen Andrew Gutti set 26th September to give his ruling on bail.