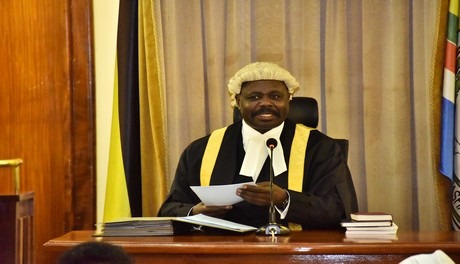 President Yoweri Museveni has responded to a letter written by Speaker Rebecca Kadaga, seeking reprimand of security officers alleged to have tortured MPs during the chaotic Arua Municipality by elections.

According to local media, the Speaker wrote seeking explanation on the actions government has taken against security officers said to be behind the alleged torture of MPs during the elections.

Deputy Speaker Jacob Oulanyah said he has been copied in in the response, whose content he said cannot be released to the public.
“The President has responded to the Speaker of Parliament of Uganda…the issues raised by the Speaker…she is the one competent to assess whether to her satisfaction, the issues she raised have been responded to,” said Oulanyah.

Oulanyah said he received a call from President Museveni, asking for a copy of the letter which he said his office had not received.

The Deputy Speaker declined to divulge the details of the said response, saying it is not the duty of the Speaker to read letters.
“It was on the demand of the response to the letter [to the President] that we did not do business last week. I believe it will be procedurally right to have the content of the letter…give us the content of the President’s letter,” said Leader of the Opposition, Betty Aol Ochan.

Her line was towed by Chief Opposition Whip Ibrahim Ssemujju, who demanded to see the response.
“We did ask you as an institution of the Speaker to give us information if you have obtained from the Head of State. The matter has not been concluded,” said Ssemujju.

Security report
MPs later engaged in a divisive debate on the country’s security situation, which revolved around a report read by Security Minister, Gen Elly Tumwiine.
“The security situation is now very calm and people should continue to conduct their businesses normally. No person, no one is above the law and lawlessness shall not be tolerated at all,” Gen Tumwiine said.

He then got engulfed in bouts of controversial disagreements with MP Ssemujju on the country’s political history.
With one point of order after another, Oulanyah counselled MPs to end divisive politics, before terminating debate on Gen Tumwiine’s statement.

Last month, MPs and a host of their political supporters were arrested and have since been charged with various offences including treason, in relation to the high octane Arua Municipality by elections.
MP Robert Kyagulanyi (IND, Kyaddondo East), also known as Bobi Wine and his Mityana Municipality counterpart, Francis Zaake are in the United States of America and India for medical treatment respectively.

They are said to be nursing wounds sustained from the fracas in Arua, which they blame on the security forces.

In a lengthy post on his Twitter account, MP Kyagulanyi accused security operatives of maiming him at the time of his controversial arrest, allegations the army denies.
They have been bonded by the Police on treason charges, just like their supporters.