As Uganda prepares for the upcoming elections in 2021, Different political actors and parties are currently busy drawing strategies on how they will win the different elective positions.

Now after approval by the Central Executive Committee, Tang Odoi, the chairman of the NRM Electoral Commission has released the Road Map that will be followed by all the NRM electorates and the flag bearers.

Briefing the media at the NRM Secretariat on plot 10 Kyadondo, Odoi revealed that on the 20th of July 2020, the NRM Secretary-General will hand over the NRM register to the electoral Commission and this will be followed by a phased issuance of forms to the district election officers in line with Covid-19 guidelines between the 15th, 16th and 17th July 2020. 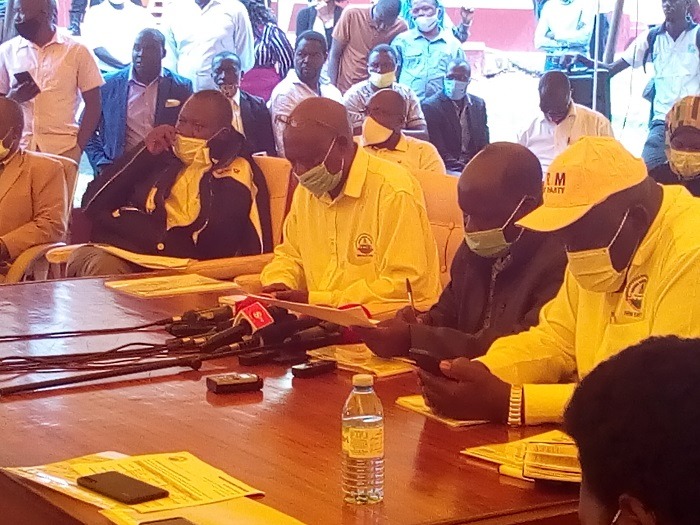 This will be followed by the capacity building of election officials at district and sub-county levels in line with Covid-19 SOPs. Thereafter, component two of the electoral cycle will commence through which the following will express interest and pick nomination forms;  presidential flag bearer, the NRM National chairman, the 1st National vice-chairperson, the 2nd National vice-chairperson, the 6 chairpersons representing Northern Karamoja. Eastern, Kampala, central and western. All this will be done between 20th – 22nd July 2020

Beginning 7th -8th August 2020, there will be an NRM conference to be held in line with the COVID-19 guidelines and the NRM presidential flag bearer will be elected. Also, the 1st National vice-chairperson, the 2nd National Chairperson who must be a female and the 6th regional chairpersons will also be elected.

From 10th August to 17th August, this period will be Nominations for Members of Parliament, and LC V chairpersons in the western region, Northern, West Nile, Karamoja region Eastern region, and central region. After residual nominations, there will be an inspection of Candidates’ Academic credentials and loading of complaints if any by the members of the public.