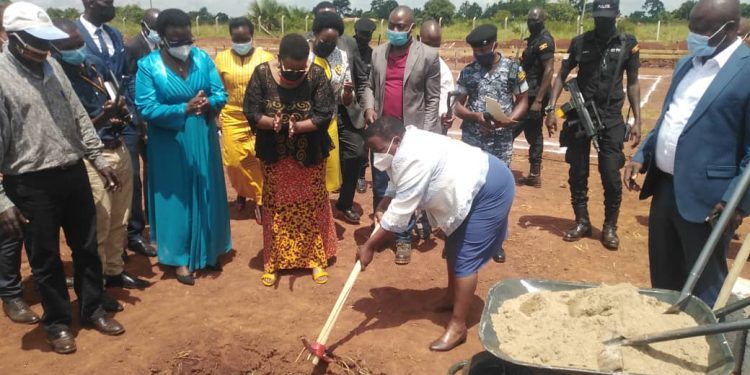 Rt Hon Prime Minister Robinah Nabanja has said bringing cancer Services near to the people of the Northern region is a great Achievement in improving the quality of life.

She made the remarks during a groundbreaking ceremony to launch the construction of a Regional Cancer Center in Omoro in northern Uganda.

She said Cancer is a long-time underestimated burden in Africa but is now an area of focus for African governments.

Hon Nabbanja added that the upcoming Cancer facility is a step towards the achievement of the goal of equal health services for all.

The executive director of Uganda Cancer Institute, Dr. Jackson Orem, said that all the Regional Cancer Centers are in the National Development Plan 3, which was one of the directives issued when HE Yoweri Kaguta Museveni visited (UCI) in 2015. He noted that this was mind and thought of HE the President.

“As other countries are not thinking about Cancers at the moment, Uganda is not only focused on COVID-19 but Cancers too thus launching this facility”, Dr. Orem noted.

Dr. Orem said that (UCI) will ensure the facility is constructed in a timely manner and he cited the Austrian government as the funder of the project responsible for all the construction works and equipping the facility.

It should be recalled that last year, the Parliament of Uganda approved 7.5 million Euros for the construction and operationalization of this project named the UCI- Northern Uganda Regional Cancer Center In Gulu, funded by the Austrian government.

Decentralization of cancer services is also already taking shape, with services in Mbarara, providing services to the majority of the clients who are located in the western part of the country.

There is a plan to establish another cancer facility in Mbale which will serve the Eastern region in a move geared at improving access to cancer services in the Country.

Mr. Sebastian Langfieldd, a representative of the AME of Austria who doubles as a funder and implementing partner, said Uganda and Austria are friendly Nations.

He said this is a step towards the achievement of the goal to save people through putting up much-needed infrastructure to diagnose and treat cancers.

Minister of State in charge of General Duties in the Ministry of Health Hon Hanifa Kawooya said that the ministry through UCI will continue to provide Cancer Care services to the country.

She thanked Uganda Cancer Leadership Institute for always ensuring that the minimal resources allocated to the institute are properly utilized.

In July 2016, (UCI) became a self-accounting Institute as a body corporate. UCI will be extended to Arua for West Nile, Mbale for Eastern, Mbarara for Western, and Omoro for Northern Uganda.

The construction of the facility is expected to take one year.