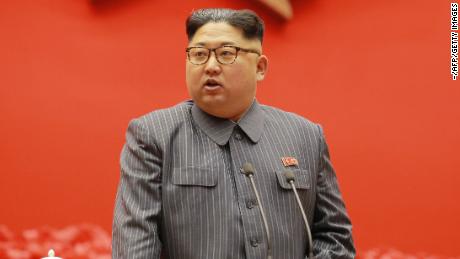 North Korea calls hotline to South Korea in major diplomatic move
By Taehoon Lee and Hilary Whiteman, CNN
Updated Jan 3, 2018
Seoul (CNN) – North Korea called South Korea on a hotline that’s been dormant for almost two years Wednesday, a major diplomatic breakthrough following a year of escalating hostility that could pave the way for future talks.
The country’s leader Kim Jong Un gave the order to open the line at 3.00 p.m local time (1:30 a.m. ET) to begin discussions on sending a North Korean delegation to the Winter Olympics in Pyeongchang, South Korea, next month.
According to South Korea’s Unification Ministry, North Korea made the first contact via the phone line at exactly the time ordered.
“We have checked the communication line and are contacting each other,” said a text message from the South’s Unification Ministry to reporters.
Neither side has yet to provide details as to the nature of the call or what precisely was discussed.
The breakthrough comes just days after the North Korean leader extended a rare olive branch to the South during an unusually conciliatory New Year’s speech, in which Kim said discussions about sending a North Korean sporting delegation to Pyeongchang should start “as soon as possible.”
In response, the South Korean President Moon Jae-In called for swift measures during a Cabinet meeting Tuesday to smooth North Korea’s participation in the Games.
But while relations appear to be thawing between the two Koreas, US President Donald Trump has shown no indication of softening his hardline stance.
In an astonishing tweet posted late Tuesday, Trump compared the size of his nuclear button to Kim’s. During his New Year’s Day address, the North Korean leader boasted that he had a nuclear button on his desk.
“I too have a Nuclear Button, but it is a much bigger & more powerful one than his, and my Button works!” the US President tweeted.
inline
Some analysts have said that North Korea’s willingness to talk to South Korea could be an attempt to drive a wedge between the US and its South Korean ally.
That’s not a view shared by Tong Zhao, a fellow at the Carnegie-Tsinghua Center for Global Policy in Beijing.
“I think that thinking is problematic. A better North-South relationship would help Washington and the international community to better understand North Korea and to talk it into taking substantive measures of self-restraint,” he said.
Rare talks
Wednesday’s contact between the two Koreas marks the first time in almost two years that a special direct hotline in the border village of Panmunjom in the Demilitarized Zone has been used to connect the two countries.
Until Wednesday, North Korea had not answered since February 2016 when South Korea suspended operations at the joint Kaesong Industrial Complex, a business park that once employed workers from both sides.
“They (South Korea) have been trying at 9 a.m. and 4 p.m. every single day, just to check if North Korea had opened that communication channel. So it is significant that North Korea has announced this,” said CNN’s Seoul-based correspondent, Paula Hancocks.
Olympics as a peace tool
Moon’s office welcomed Wednesday’s gesture for talks and expressed optimism they’d be extended from participation in the Winter Olympics to other issues.
“The restoration of the communication channels means a lot. It is assessed that (we) are headed to setting up a structure through which contacts can be made on a regular basis,” said Presidential press secretary, Yoon Young-chan, in a statement echoed by the country’s Unification Ministry.
Moon has championed the 2018 Winter Olympics, set to begin February 9, as a possible means of easing tensions on the Korean Peninsula.
In a November interview with CNN, the South Korean leader described the Games as an opportunity for inter-Korean peace and reconciliation, and expressed his hope that the North would participate.
Only two North Korean athletes have qualified for the Games — pairs figure skaters Ryom Tae-Ok and Kim Ju-sik. However, the country’s National Olympic Committee did not meet an October 30 deadline to accept their spot.
There has been talk of the International Olympic Committee granting an additional quota, something previously proposed by Choi Moon-soon, governor of the Gangwon province that will host the Winter Games.
“If North Korean athletes can participate in the Winter Games and even parade together with their South Korean counterparts in the opening/closing ceremonies, that would send the North-South relationship to the highest level ever seen over the past few years,” Tong told CNN.
US’ tough stance
Trump’s hardline stance was backed by the country’s Ambassador to the United Nations, who reiterated Tuesday that the US “will never accept a nuclear North Korea.”
Before the call between North and South Korea, Nikki Haley said North Korea needed to ban all nuclear weapons as a precondition for any talks.
“We consider this to be a very reckless regime, we don’t think we need a Band-Aid and we don’t think we need to smile and take a picture,” she said. “We think that we need to have them stop nuclear weapons and they need to stop it now.”
Earlier this week, Euan Graham, director of the International Security Program at the Lowy Institute, told CNN that the North’s offer of talks with South Korea shouldn’t be taken at face value.
“Up until now, they just haven’t shown any interest in engaging with the South, or anyone else for that matter,” he said.
“But an olive branch is always wrapped in some sort of belligerent coating in North Korea, it doesn’t mean the end of the nuclear program.
“Even if they do reach out and send a delegation to the Pyeongchang Winter Olympics, it wouldn’t surprise me at all if they accompanied that with a continuing testing program as the spring comes, be that a submarine launch or satellite launch,” Graham added.