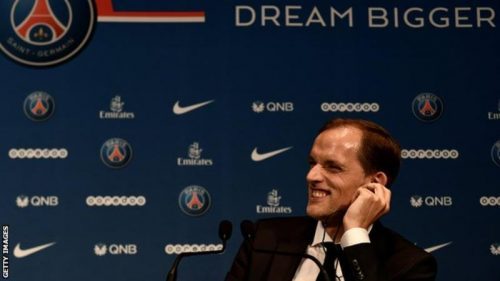 German Tuchel spoke to the media on Sunday for this first time since his appointment on a two-year deal.

Neymar, who joined PSG last August from Barcelona for a world-record fee of 222 million euros, has been linked with a move to Real Madrid.

“I met him last Sunday and it was a very good meeting. He’s an artist, an exceptional player, one of the best in the world.”

Tuchel, who left his role at Borussia Dortmund a year ago, will officially begin his new job in time for the start of pre-season training in July as he replaces Spaniard Unai Emery.

Neymar won the French Player of the Year prize despite a foot injury, meaning he has not featured for his club since the end of February.

He has been named in Brazil’s squad for the World Cup in Russia, which starts on 14 June.

Despite constant speculation, PSG president Nasser Al-Khelaifi has denied that the 26-year-old striker will leave after just one year in Ligue 1.

“We started talking about soccer and I saw a smile on his face and that is what I want to see.

“If we find a way to build a structure around him, so he can show all his talent on the pitch, I think we have a key player to win our games.”

Entebbe Police are holding a man for illegal gun possession.

Korea is a model for Africa’s industrialization, says President Adesina