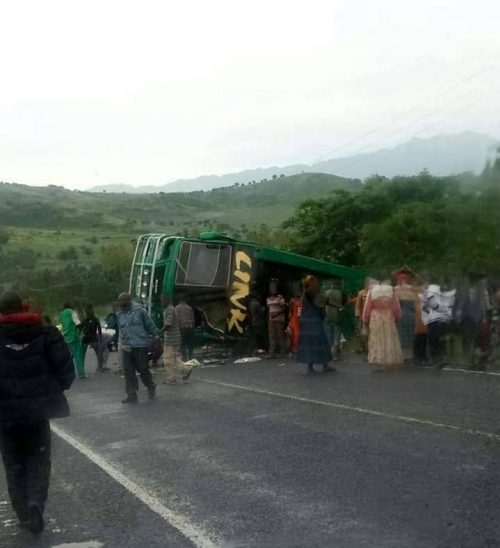 18 passengers have been injured in a bus accident in Kasese district. By URN.

The bus registration number UAW 354V, belonging to Link Bus Services Company overturned at a corner along the Bwera-Kikorongo Road at Kaleberyo village, Kahokya Sub County. It was carrying 64 passengers and was heading to Kampala.The injured that include the bus driver and conductor, were rushed to Kilembe, Kagando and Bwera Hospitals. No deaths were reported. Deo Mwanika, one of the survivors, says they heard a metal fall off the bus and the driver lost control.Saad Nyakahuma the Link Bus Manger – Bwera, says the ball-joint got disconnected from the original position rendering the tyres to mal- function.Bruce Oinebye, the Officer in Charge of Traffic Police Kasese, says the accident was caused by speeding.Last week, a Link Bus knocked dead one of its staff in Kasese town.