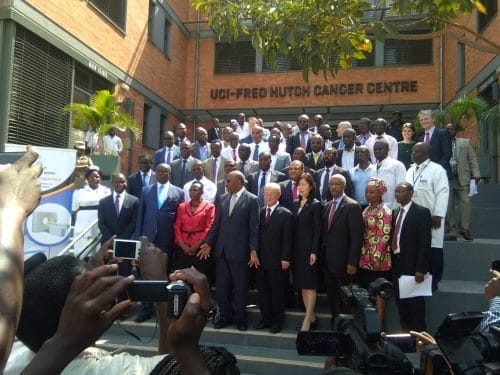 The milestone comes slightly more than one year since the breakdown of Uganda’s only cobalt 60 radiotherapy machine installed at Mulago in 1995. The Atomic Energy Council later stated that long before it broke down, the machine was no longer efficient in the treatment of cancers, since its radiotherapy source was replenished.

The ray of hope comes with the installation and commissioning of the new machine procured from the Czech Republic at a cost of 665,000 Euro (3 billion Shillings). The machine has the capacity to rotate at different angles and cover various parts of the body, according to Health Minister Dr Jane Ruth Aceng.

According to UCI, 120 patients have so far received treatment from the new machine. The machine can treat up to 80 patients per day. The old cobalt machine broke down after treating 24,465 patients.

Dr Jackson Orem, the executive director of Uganda Cancer Institute says that even with the breakdown of the machine that took over a year to rectify; the institute has no backlog of cancer patients and currently is treating new patients.

Hellen Kaidu, a 43-year-old lady cervical cancer patient from Pallisa district was is among the 120 patients that have so far received radiotherapy treatment. She glimmers with the hope that the commissioning of the machine will improve cancer treatment at Uganda Cancer Institute.

“I am happy that I received treatment with the machine. Last year I was put on pain medicine because only severe cases were sent to Nairobi for radiotherapy treatment.”

Speaking at the commissioning, Yukiya Amano, the director general of the International Atomic Energy Agency said that they were proud that Uganda sought assistance from them in the procurement of the machine.

The radiotherapy department is open throughout the work week and patients can access treatment there after being assessed by medical personnel at UCI.

Radiotherapy is one of three methods that can be used globally in the treatment of cancer. According to the World Health Organization, it is effective in treating 40 percent of patients suffering from cancer. Other methods such as surgery can effectively treat 49 percent and systematic treatments such as chemotherapy by 11 percent.