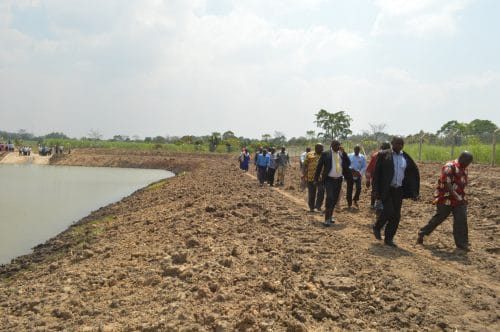 Because of the effects of climate change in Uganda, the minister of agriculture, animal industry and fisheries, Vincent Bamulangaki Ssempijja says government has earmarked funds for the construction of 200 valley dams countrywide for water for production this financial year.

The minister was launching the project at Nansoloolo village, Namasagali Sub-county in Kamuli District today, he said one of the ministry`s objectives is to ensure food security in the country, and he added that to achieve this, farmers have to be supported through setting up irrigation systems.

Ssempijja said government is also in negotiations with the South Korean government and other donors to develop a solar pump irrigation scheme system in the country as directed by H.E the President of Uganda recently.

Eng. Boniface Okanya, the project manager told the press that, Kamuli District will get five valley dams under this arrangement, and the program will roll-out to the entire country, he said 100% of the project is funded by the government, but an individual who may want a similar service on his/her farm will get it at a subsidized price.

For many years, Ugandan farmers have relied and thrived, on rainfall to water the land, with irrigation a preserve of large-scale schemes for cash crops such as rice, sugar canes, tea and flowers for export.