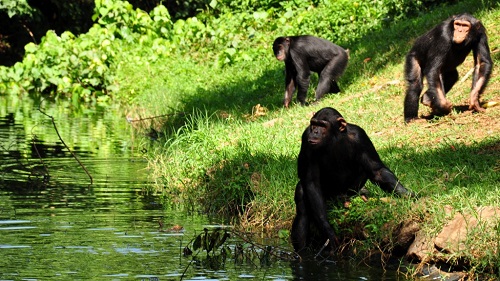 The highly infectious Corona Virus Disease (COVID19) was initially known for antagonising human beings, directly and indirectly, with a combination of symptoms including cough, fever and difficulty in breathing.

But the world got concerned, recently, about the virus spreading to domestic animals including cats and dogs and zoo animals.

A case in point is a dog in Hong Kong and cats in Belgium and America tested positive to the Coronavirus. At least five tigers and three lions in New York- Bronx Zoo also contracted the disease according to a statement released on April 22.

As a result, the news has alarmed wildlife keepers in Uganda including all National Parks, game reserves plus public and private zoos. To prepare for the unseen outcome, the wildlife authorities are on high alert to save the wild animals most especially those that are more susceptible to the virus.

Eyewitnessug.com has learnt that in the meantime, special attention is given to primates such as chimpanzees, gorillas, baboons, monkeys and others. Primates share some key physical and behavioural characteristics with human beings.

According to Bashir Hangi, the Spokesperson-Uganda Wildlife Authority (UWA), they have set strict guidelines for our staff members in addition to restricting access to the parks and wildlife centres.

He further explained that after realising the threat to the animals, has forced them to suspend the primate tourism in national parks such as Bwindi impenetrable forest and others that harbour different primates.

“We are on high alert because we anticipated such virus transmissions could affect the animals. However, this has prompted us to tighten up our operations,” he said.

Hangi further explained that they have provided appropriate Personal Protective Equipment (PPE) including face masks, gloves, coveralls, gumboots, sanitisers among others for the trackers in primate parks.

Apart from providing the protective equipment, Hangi added, all the UWA personnel in the wildlife centres were strong urges to follow, the Ministry of Health guidelines in combating the COVID19virus.

“As for public and private zoos we have suggested limited access and for the wildlife workers to keep distance in addition to adherence to MoH guidelines,” he noted.

Recently, Hangi told reporters in Kampala that the pandemic has greatly hindered the tourism sector in the early months of the outbreak.

He explained that it completely cut off both local and foreign tourists visiting the national parks and game reserves and the situation worsened after the lockdown.

Even after the pandemic clears and the World Health Organisation (WHO) declares Uganda free from the virus, it may take the sector some time to recover, according to Hangi.

These include primates (chimpanzees, monkeys), big cats (lions and cheetahs), big hooves including (rhinos) among others hoof stock.

However, due to the fact that the Chimps share similar DNA with human beings (98.7%), the zoo administrators have become much more concerned since they (chimps) are at high risk of catching the highly risky respiratory diseases such as Severe Acute Respiratory Syndrome (SARS), COVID19, and others that affect human beings.

Eric Ntalumbwa, the UWEC –Public Relations Officer, told us that they have increased their vigilance adding that they are prepared for they have put different measures to contain virus among the animals.

“We were shocked to hear about a tiger in New York zoo that got infected because we also, keep big cats here such as nine lions and two cheetahs and Tsavo cats to mention. But we are monitoring the animals and putting strict measures to restrain potential infections,” he said.

To avoid people-animal closeness, he explained, authorities banned public access of the zoo while restricted access has been imposed on some stuff for the safety of the animals.

Also, special programs including the behind-the-scene programs, where a visitor has an up-close with the animals, visitors acting as the keeper for the day were put on halt.

UWEC subscribes to WAZA, and PAZA where Dr James Musinguzi, the UWEC Executive Director sits as chairperson. In that regard, they had to adhere to the guidelines hence prohibiting public access although normal operations are ongoing.

“Our top priorities are visitors, staff, and animals. But we stopped the visitors. Also, our staff left and we currently have few who are essential at the moment such as nutritionists, animal keepers, and veterinary doctors because animals need to feed and healthcare to maintain their lifestyle,” he noted.

At the zoo, the remaining workers are regularly checked before accessing the premises.

Even with sanitizers and protective gear availed (face masks, gumboots, aprons, and gloves), the animal keepers have been advised to maintain social distancing of between four and six meters from the animals.

More still, the zoo is disinfected every morning and evening in addition to different washing points.

At Kavumba Recreation Centre, there is a zoo containing some animals. It is also supervised by the UWA to maintain animal welfare and zoo standards.

According to Grace Agaba, the Centre’s Director for Finance and Administration, they are currently struggling to maintain the place due to lack of enough funds.

However, she added, they are dipping a hand in their meager resources to ensure the animals are fed and treated routinely.

To avoid infecting animals with any disease, Agaba explained that they have reduced on the number of workers at the centre and retained only the zoo handlers including cleaners, those who feed the animals, veterinary doctor and the security officer.

“Here, general hygiene measures are applied. You must be checked to enter here. You must wash hands with soap before you feed the animals,” she said.

She further noted that tourism and hotel businesses at the centre are feeling the pinch of the outbreak since they do not get any bookings in the meantime.

In 2018, the tourism sector contributed 7.7% (8 trillion shillings) to the country’s Gross Domestic Product. As a major export earner, tourism scooped USD 1.6bn from travellers visiting various tourism products all over the country.

However, there will be a setback and the country may take some months to recover from the COVI-19 shock. Losses have been made through cancelled bookings and trips due to the lockdown.

Worldwide, the infection in animals has raised questions about whether animals can infect human beings in one way or another. The current spread of COVID-19 is known to be human to human transmission.

But according to the WHO, there is no evidence suggesting animals can pass on the coronavirus although studies are underway.

The Center for Disease Control says some coronaviruses that infect animals can sometimes be spread to humans and then spread between people, although this is rare.

If the animal keeper is sick with COVID-19, CDC advises him/her to restrict contact with pets and other animals just like they would around other people.

Investigations are underway to establish the potential role of an animal reservoir in this disease, according to the organisation.

But, as of now, there is not enough scientific evidence to identify the source or to explain the original route of transmission from an animal source to humans.

The organisation further explains that with the COVID-19 virus infections among the human population, there is a possibility for some animals to become infected through close contact with infected humans.

“Studies are underway to better understand the susceptibility of different animal species to the COVID-19 virus and to assess infection dynamics in susceptible animal species,” the organisation notes.

Currently, there is no evidence to suggest that animals infected by humans are playing a role in the spread of COVID-19. Human outbreaks are driven by a person to person contact.

However, the Public Health and Veterinary authorities are advised to work together using a One Health approach to share information and conduct a risk assessment when a person with COVID-19 reports being in contact with companion pets or other animals.