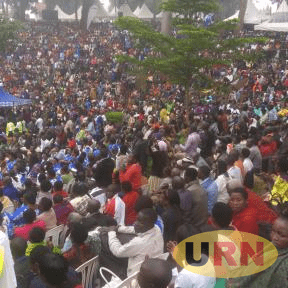 By URN.
President Yoweri Museveni has pledged to extend financial support to the Church of Uganda to improve the state of the martyrs’ site at Nakiyanja -Namugongo.

The President was speaking to thousands of Christians gathered at Nakiyanja to celebrate the 46 Martyrs that were killed 132 years ago.

“We are going to develop this place, at the martyrs museum we extended a lot of support and we are continuing. It is sloppy and slippery were you sit, we need to construct steps like at the Catholic Shrine.” said Museveni.

He said that he will be discussing the matter with the church leaders.

Meanwhile, Museveni also appealed to religious leaders to help educate masses about poverty eradication by spearheading the fight against poverty.

He also spoke against alcoholism, drug abuse, prostitution and others saying that these were not Godly and a big challenge to the Church.

Preaching at the Anglican Shrine at Nakiyanja- Namugongo was delivered by the Bishop of Basingstoke in the Diocese of Winchester David Grant Williams.

Every June 3rd, the faithful, especially Anglicans and Catholics, take part in a pilgrimage to the Uganda Martyrs Shrine Namugongo from different corners of the world in commemoration of Martyrs.

The 22 catholic and 24 Anglican converts were killed 132 years ago between May and June 1886 on the orders of Kabaka Mwanga of Buganda Kingdom. In October 1964, Pope Paul VI canonized the Uganda Martyrs.

The Anglican this year picked as its theme: “…Be faithful even to the point of death and I will give you the Crown of life.” It is derived from Revelations Chapter 2 Verse 10.

The Catholic Church on the other hand picked “Let us walk in the light of God as a family.” derived from 1John Chapter 1 Verse 5.

With an estimate of four million people flocking Namugongo this year, roads at both the Anglican and Catholic shrines were blocked and pilgrims walked in half-closed roads heavily guarded by security operatives. Some of the pilgrims were from Kenya, Tanzania, Rwanda and other countries.

At the Anglican shrine, the lead organizing dioceses were Kigezi, North Kigezi, Muhabura and Kinkiizi.