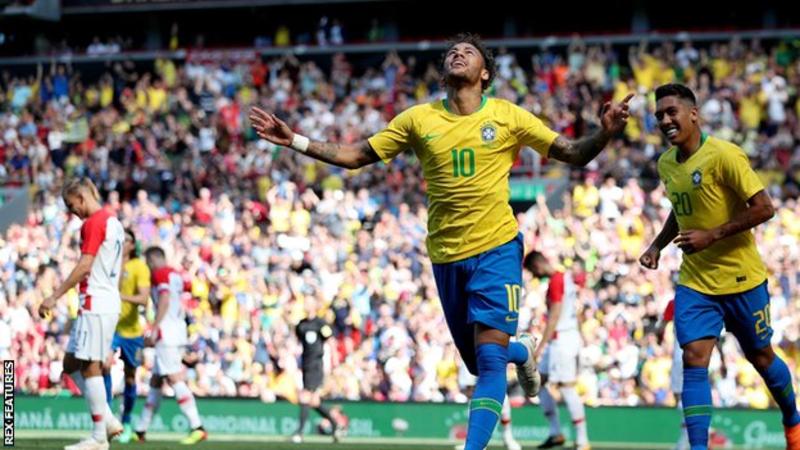 The Paris St-Germain star, 26, smashed a shot in off the bar after a slick move involving Chelsea’s Willian and Barcelona’s Philippe Coutinho.

But Liverpool’s Roberto Firmino scored in added time to seal the victory.

Brazil, who became the first team to qualify for the World Cup in March, face Austria next Sunday before starting their Group E campaign against Switzerland on 17 June.

The return of their talisman Neymar, who joined PSG from Barcelona for £200m last August, is well-timed after he missed more than thee months since injuring his ankle in February.

He also missed the end of Brazil’s last World Cup campaign in 2014 after breaking a bone in his back during the 2-1 quarter-final win over Colombia. Without him Brazil were thrashed 7-1 by Germany in the semi-final.

How coach Tite has brought Brazil into the modern age
Relive Sunday’s World Cup warm-up games
It was a satisfactory end on Merseyside for Firmino too – the 26-year-old has now scored 15 goals at Anfield for club and country since the start of the 2017/18 season.

Croatia can take solace from having the best of a combative first half that earned them bookings for Kramaric, shown yellow for a knee-high studs-up foul on Thiago Silva, and Ivan Perisic for hauling down Manchester City’s Gabriel Jesus.

Both managers made several late substitutions that slowed the game down and Zlatko Dalic’s Croatia found chances harder to come by after Neymar’s introduction at half-time.

Afterwards Brazil’s coach Tite admitted that Neymar’s performance surprised him after his extended spell out following surgery in March.

“For the first match back I actually expected less from him. I would have been happy with a quieter performance,” he said.

“What he did was really extraordinary. Neymar is an extraordinary individual talent but the goal he scored came from a move, a build-up, involving the whole team.

“He’s aware of what they bring to him.”

Neymar and Firmino celebrate
Brazil have won 16 of their 20 games under coach Tite
There was no doubting the credentials of Brazil’s starting front three with Jesus, Coutinho and Willian offering a formidable attacking threat.

But it is the triumvirate behind them which perhaps sets manager Tite’s team apart from the South American nation’s famous former sides.

Regularly selecting three defensively minded midfielders, even if Barcelona’s Paulinho, Real Madrid’s Casemiro and Manchester City’s Fernandinho are all comfortable on the ball, is at odds with the Samba football stereotype.

With the more attack-minded Taison on the bench alongside Firmino, whose presence could be accommodated in the same side as Coutinho, Tite showed his pragmatic side once again.

The former Corinthians coach – a defensive midfielder himself during his playing career – puts the emphasis on building a platform for his front-men to shine, at the expense of extra midfield craft.

They didn’t quite click in the opening 45 minutes as the Liverpool sun beat down and Croatia pressed them relentlessly.

But Tite has enviable squad-depth and added the game-changing brilliance of Neymar at the break as Fernandinho was sacrificed.

Firmino followed later and those switches made all the difference – also underlining why Brazil head to Russia as many’s favourites to reach the final.

Mohamed Salah and Philippe Coutinho
Coutinho played half a season alongside Salah for Liverpool before his move to Barcelona
Coutinho believes Neymar could even outshine world football’s reigning superstars Lionel Messi and Cristiano Ronaldo in Russia.

“It feels like the right moment for ­someone to take their chance at this World Cup,” he said.

“Messi and Ronaldo have been up there on their own for so many years. I think it may be time for other players to aspire to be the best in the world – and the best at this World Cup, too.

“Salah and Neymar have serious chances to do that. It depends on how the tournament goes, of course, but they have the talent to do it. Those are the players I would pick out.

“Salah is going to be a player who will be a big hero at Liverpool for a long time, I am totally convinced of that.

“He can do well in the World Cup, too – it all depends on how far his team can go. But we also know what Neymar can bring. He is a special player.”

Croatia get physical with stern task ahead

Their intense and distinctly unfriendly approach could stem from the tough task awaiting them in Group D.

Argentina, Nigeria and Iceland will be challenging opponents and Dalic clearly wants his side to be fit and firing for their opening game against Nigeria on 16 June.

He can be largely satisfied with what he saw on Merseyside. Croatia have a nice mix of experience – Vedran Corluka, Ivan Rakatic and Luka Modric all have over 90 caps – alongside dynamic younger talents such as Ante Rabic, Marko Pjaca and Kramaric.

They are tough, organised, use the ball effectively and this World Cup could represent a peak moment for many of their ageing squad.

Losing to such a wonderful cameo from Neymar is no major dishonour and they return to home soil to face Senegal in their final warm-up game on Friday.