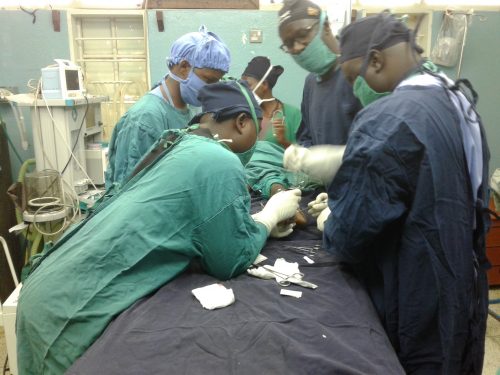 Speaking to Dr. Tito Beyeza, a senior consultant orthopedic surgeon at Mulago, he reveals that the 12th camp is mostly handling child related cases among them being cerebral palsy, curved libs and hips replacement. Of the over 85 children operated, 30 are having cerebral palsy( children with brain damage), club feet and cannot stand or even walk and 20 had bending knees (Angular deformities about the knee).

Angular deformities are caused because of lack of vitamin D and this is common in winter countries and in Uganda, its due to bones not growing properly.

He expresses concerns that 90% of the beds in the orthopedic department at Mulago hospital are taken up by adults who lost their legs due to accidents. This leaves no space for children to have their cases handled well. Some deformities are acquired and others are bone.

Meanwhile, the chairman Narayan Seva Sensthan, Dr. Rajesh Agrawal says, they are extending free service to vulnerable Ugandans as a sign of love and care to Ugandans as they remember their go father, with the camp costing UGX.100M.

Speaking to Muhammad Sendiwa Mutaka from Kikyusa-Luwero district, a father to Sempala Muhammad (12years) who also has a leg deformity and was just 20 minutes away from entering the theater for surgery narrate that, it all started at school and as time passed by, the deformity spread more turning Sempala into a lame child who cannot perform various house duties like digging, running as he used too before the deformity cropped in.

According to the 2012 national census, Ugandans with disabilities account for 20% of the national population and now Dr. Tito says, for one to under go one of these surgeries, they will have to part with an average of UGX.5M

Dr. Tito further says, the children who have been escorted by their parents, come from as far as Busia, Hoima, Mpigi, Luwero, Masaka among other districts.