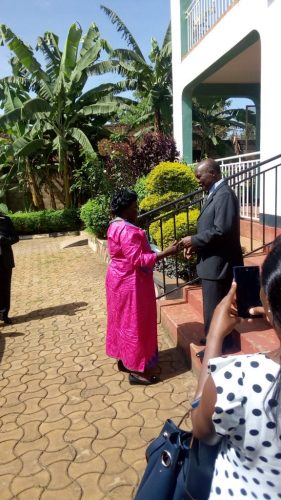 Betty Aol Ochan the leader of opposition paid courtesy cal call to the former President of Democratic Party (DP) Dr. Paul Kawanga Semwogerere to at his home in Lubaga to discuss different issues in politics. From there Aol criticized the ministry of transport for not doing enough to enforce water transport guidelines

They engaged for over two hours in the closed door affair and afterwards Aol addressed the media on the agenda of their meeting which was also attended by Henry Bazira Sewanyana the former Masaka South West mp and noted that they both agreed on many issues including the necessity of the National Dialogue but they disagree with the concept under which its being organised claiming its just a window dressing.

Aol added that they discussed the future of the country and cited out the perennial leadership of President Museveni who is about to make 33 years on the mantle as a key threat to democracy of Uganda, claiming that he has denied the country a chance to witness peaceful transfer of power.

on the tragic boat accident which capsized and killed over 30 people on L.Victoria, Aol extended condolences to the families which lost their beloved relatives but castigated the ministry of transport for sleeping on duty and failed to regulate water transport and which allows a chance for boats in bad shape to provide transport services and end causing accidents. she wondered why government does not employ similar force to enforce transport guidelines as it does when enforcing the public order management act to disperse opposition rallies.

She tasked the minister of transport to make a statement on the floor of parliament tomorrow on the terrible accident that claimed lives and what government is intends to do to avoid such cases in the future.