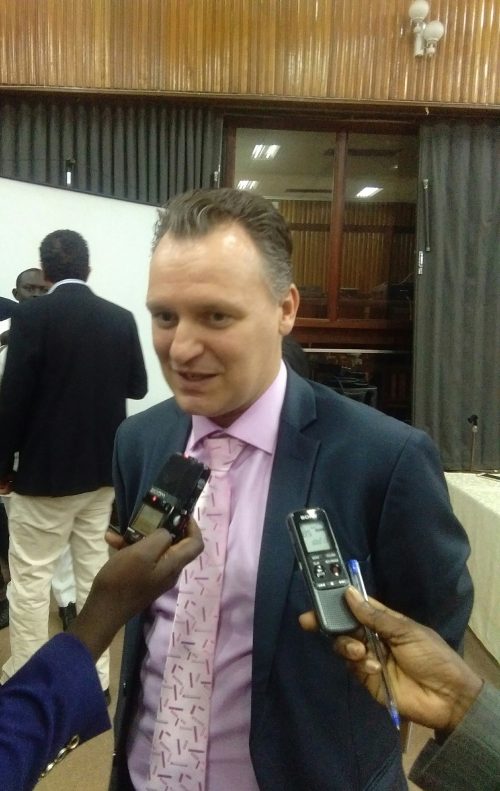 The Chief Executive Officer of MTN Uganda Wim Vanhelleputte, has said majority of Ugandans have overwhelmingly embraced electronic airtime following the phasing off of scratch cards.

Uganda Communications Commission (UCC) had set 31st July as the deadline for using airtime scratch cards. However in a meeting at Parliaments conference hall involving the Speaker Rebecca Kadaga, Members of Parliament, Telecom giants and the Ministry of ICT officials, a U-turn was made on scrapping off scratch cards.

Security agencies had advised Government that there is a direct link between sell of scratch cards and sell of unregistered simcards. The move to scrap off scratch cards however drew bitter reactions from MPs who said their constituents were unable to make communication for lack of airtime.

However Vanhelleputte now says although they had phased off the airtime scratch cards, they will look at importing them back at the forces of demand and supply.

He says 99% of Ugandans had already turned to use of electronic airtime, and this was more accessible and convenient.
He made the remarks at the backdrop of the meeting with MPs at Parliament this week .

“We will see how market forces play. If there is a strong demand to go back to scratch cards, we will have to find a way to address those demands,” said Vanhelleputee.

He said MTN does not have enough scratch cards available in the country, MTN will need to see if they can be brought, because the company has been phasing them out for the last 6-8 weeks, therefore not available in the warehouses.

“let us not make a mistake ,we don’t want any of our customers to be left out, I mean what would our interest as MTN be that MTN customer cannot recharge airtime, that would be completely against our own interest ,so it’s we first as commercial companies ,we want to make sure that all our customers can load airtime Mr. Wim noted ”.

He added that if customers massively want the airtime scratch cards back, the telecom operators will have to find the easy way to serve those customers.

He however said that majority of Ugandans have embraced the use of electronic airtime loading services.

“Figures on the ground show that 99 percent of customers have already embraced the easy load, I have the figures and am following them every day,” Vanhelleputte said.

He added that the telecom operators will wait and see how the market will react, but most customers have already embraced the easy load.

Meanwhile Mr. Wim has explained why MTN is still charging 1% on Mobil money, when as asked by journalists at Parliament, he said that the tax bill has not been changed.

He said President Museveni started the debate, for the 1% to be discussed, if it can be reduced to half percent, so government brought back a proposal to Parliament ,but so far Parliament is still debating and the committee
of Parliament on finance is still ongoing ,the 1% is therefore still applicable .

“We are disparately waiting for the Parliament to vote and agree on the new tax bill so that we can immediately, after the President signs, we can implement ,MTN boss said”.

On refunding customers ,Mr Wim Said that MTN has reimbursed every single shilling that was taken from the 1st of July until – the 5th of July ,because that 1% the companies were instructed by Uganda revenue authority (URA) to charge on deposits,it was ruled that end of July that the operators needed to reimburse all those 1% on deposits from 1st July -5th July .

“I can guarantee you everybody got their 1% back”, may we didn’t communicate properly on it but, I will take that blame, I will talk to my teams because it’s not the first I hear the comment, I know we have reimbursed apparently some customers have not been made aware although the money is on their accounts ,so all the reimbursements MTN had to do has been done Mr. Wim noted”.

He explained that the transactions that are still charged on 1% is transfer from one phone to another is charged 1%, when one goes to an agent to do a cash out the withdraw is also 1%, so a customer send 100,000 from one phone another 1000 shillings will be taken and will remain with 99,000 shillings because that’s the one percent on charge.

“The 1% is still applicable on transfers and all withdrawals and on all payments, the government proposal is half a percent on withdraws only, that is one is given” it’s a good step, and we applaud it”, but really what we should do is to scrap it completely, that would really bring back the energy and industry back to life.

He adds that the 1% is hurting the agents ,the customers and the industry, so the best thing to do is to even remove ,the half percent and bring it back to zero .