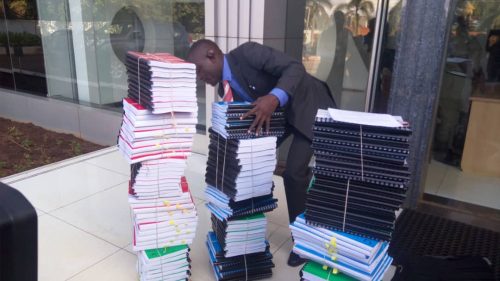 The age limit petitioner Male Mabirizi has today formally filed his appeal to challenge the judgment made in Mbale by the constitutional court which justified the removal of age limit cap for presidential aspirants in the constitution. Mabirizi carried 150 big booklets paged 36960 pages on a pick up full of evidence to back his appeal

He has highlighted 84 grounds in the appeal among which he faults the the four justices of the constitutional court for approving amendment of article 102b after faulting procedures of enacting and assessing under which Parliament handled the entire constitutional amendment .

Mabiiizi also challenges the decision of the lower court not to summon the speaker of parliament in court yet she presided over the whole process and justices did not give reasons to that effect. he adds that the same court failed to evaluate evidences given by witnesses like the chief of defense forces Gen. David Muhoozi.

He also challenges the failure of of the constitutional court judges to award him professional fees and damages yet other petitioners who had lawyers were awarded. He contends that the decision contravened hi right to fair hearing
He noted that his appeal is a litmus test to the supreme court after the constitutional court failed the same test on 26 July.

The group of members of parliament who also petitioned the constitutional court over age limit, through their lawyers Erias Lukwago and Ladislaus Rwakafuuzi filed a notice of appeal two weeks back in the supreme court and any time they will be filing a formal appeal.