The Head of Pediatric Oncology Department of Uganda cancer institute, Dr Joyce Balagadde has said 7000 children are reported to develop cancer every year. 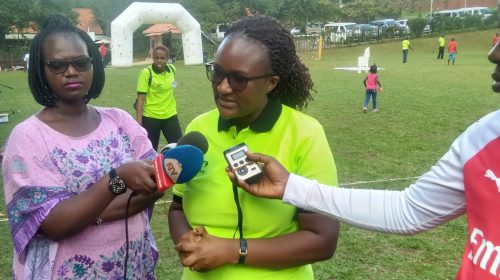 She said currently in Uganda, it’s estimated that 7,000 children develop cancer per year, according to information from Kampala cancer registry, which is a population based cancer registry.

She said camp is to celebrate the life of all the childhood cancer survivors who have walked the journey of cancer and went through all the treatments, got cured and Went back to school.

“All the children who are here, were treated for cancer as children, so we have some children who are now 17 years of age and finished treatment,’’ so they come to us when they are in their teenage from 15, 16, and 17 age, and some of them are now above the age of 17, stretching all the way to 5 years “. Dr Balagadde noted.
She also revealed that that commonest cancers in children discovered at Uganda Cancer institute (UCI) include Leukemia, the cancer of the blood, that of the Kidney, Muscle, Bone, Lymphnodes among others.

“Leukemia is the most common cancer in children worldwide “why it’s the commonest, I can’t answer that, it’s like asking me why are you tall and the other person is short”.

Dr Balagadde adds that, in the past, the Cancer called Sarcoma, the cancer of the jaw, was thought be the most common among children, but it has been discovered in the last two years, through research by Collaborating
Partners and Uganda Cancer Institute (UCI) oncologists, who have been able to make more accurate diagnosis for children with cancer , found Luekemia to be the highest.

She says as Pediatric oncologists, they advocate for early diagnosis for high index of suspicion for children who may have signs.
“For this I would say ,people ask us what are signs of cancer ?people ask us that question all the time and the challenge with childhood cancer is that the symptom of childhood cancer, are very similar to the symptoms of common illnesses like malaria sickle cell disease and TB .

She notes that if child has an illness and they are treating it, without improvement, you should think perhaps this might be cancer, so if the child gets recurrent fevers for resistance and is treated for malaria at hospital and are not getting better, then they are possibilities that it could be cancer”. The oncologist explained.

Dr Balagadde adds that, if a child is having pain in the bones that is unexplained and is taking long to recover, a child has a swelling, that shouldn’t be there, and then child should get evaluated.
End