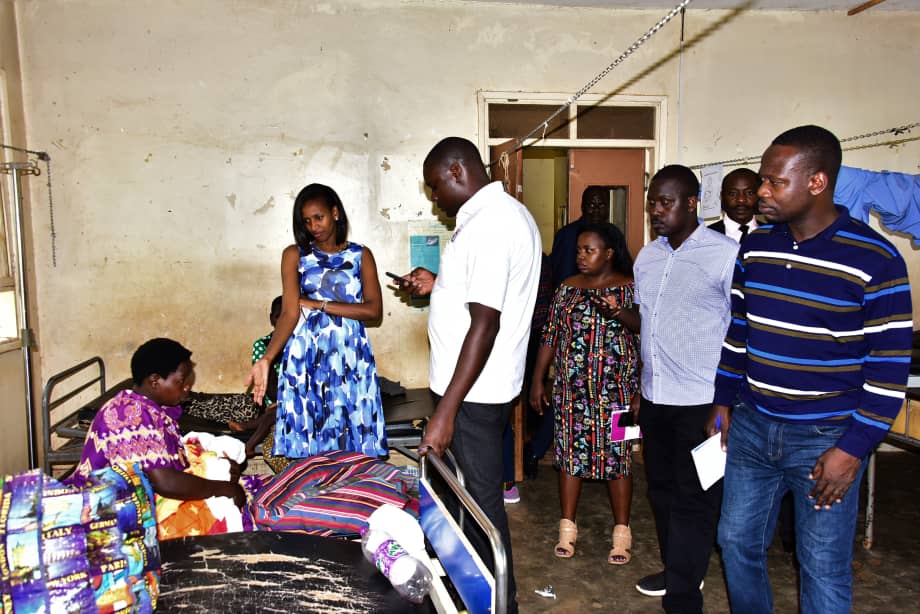 Legislators on the Committee on Health on an oversight visit came to the aid of an expectant mother and helped her deliver a baby at Kikuube Health Center IV.
The MPs who visited the health center on Friday and found no health workers took charge of the situation and saved the lives of expectant mothers. Two women were due for delivery, while one had had a baby without the help of a midwife or health worker at the facility.

“I am stranded here since yesterday because I was asked by one of the staff to pay sh 20,000 before iam discharged, I come from Kiziranfumbi but I don’t have transport back home,” Winnie Kamuhirwa told the MPs.
During the inspection exercise by the MPs at around 4:00pm, one of the expectant mothers, Night Scovia suddenly developed labour pains and she dragged herself to the labour suite. 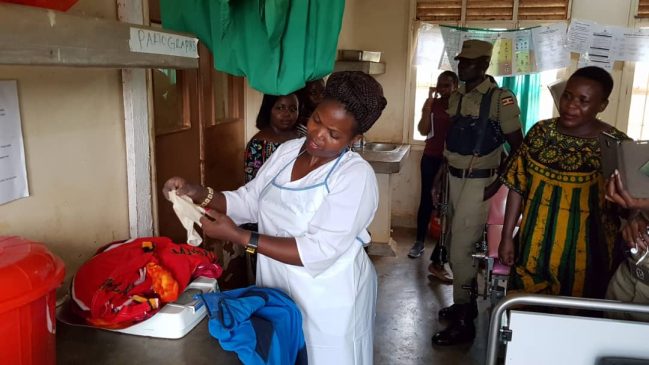 Realising that there was no one to help the expectant mother, Bundibugyo Woman MP, Hon Bebona Barungi with training in midwifery and nursing decided to go into the Labour suite and offer support.
“Where are the gloves and cotton wool, the woman is already pushing, find them,” Bebona asked fellow MPs and parliament staff who were close by.
Bebona was supported by the Dr. Micheal Bukenya (Bukuya County) a specialist in gynecology and obstetrics, and Dr. Sam Lwamwoki (Workers MP), a general medical practitioner and Butaleja Woman MP Milly Mugeni.

Bebona later broke the news to the rest of the MPs on the Committee who were waiting outside the Labour suite.
Scovia has delivered a baby boy weighing over three kilograms,” Bebona told other MPs.

“This is my fourth baby; Iam lucky this one has survived. My third born died while I was delivering at home,” Scovia said.

The Committee chairperson , Dr Bukenya placed a call to the in charge of the health centre who was not in the district at the time.

“Hallo, where are you? ….You are in Kampala!. What are you doing in Kampala? You go to attend to a conference and leave no one in charge of the facility! “ Bukenya was heard speaking on phone.
Dr. Gerald Asaba, the assistant administrator of the health centre appeared and began making calls to his staff to return but most of them did not pick his calls.
“Why do you put all the blame on me who is present instead of finding out the cause of staff absenteeism,” Asaba lamented to the charged MPs.

The MPs were disappointed by the filthy state of the centre and proposed to close it, but instead resolved to summon the Hoima region District Health Officer (DHO), Chief Administrative Officer (CAO), Hoima Hospital administrator and Kikuube Healthy center IV, and the In charge Maternity wards of Hoima and Kikuube Healthy facility to appear at parliament to clarify on the anomaly.
.

“The challenge might not be about salaries, but the mindset and administration of healthy workers. As government we have started on programs on how to orient the mindset of workers not to only focus on salaries but on how to change. Healthy workers do a lot of work, but in most healthy facilities there are no machines. We have to acknowledge that some Healthy facilities are non-functional due to funding limitations.” Lyomoki said.

When the MPs checked different rooms at the facility, they discovered medicine which had been hidden off the shelves, and sold to patients instead.

“When we come for checkups, healthy workers only prescribe the medicine and ask us to buy medicine from either within the healthy center or outside,” Kamuherwe said.

Earlier in the day, while at Hoima Regional Referral Hospital, the MPs were informed that the referral system is nonfunctional.

“This situation has led to over congestion in Hoima Referral hospital with a catchment area of Kibaale, Kiboga, Masindi Kikuube and some patients coming from the Kyangwali refugee Settlement and the Democratic Republic of Congo,” said Agamba.
ENDS