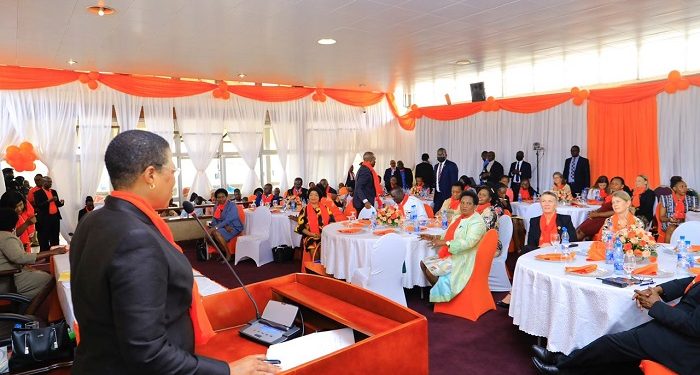 Urge Gov’t to Step up Implementation of Gender Laws.

The Speaker of Parliament Anita Annet Among has today launched the 16 Days of Activism Campaign 2022 at an event organised by Uganda Women’s Parliamentary Association with a call on the government to operationalize laws against gender-based violence against women and girls.

Speaking during the launch of the 16 days of activism campaign against women and girls at Parliament runing from November 25th up to December 10th, Speaker Anita Among expressed displeasure that the government has still failed to popularize and implement laws in place to shield women and children from violence despite budgets allocated to relevant agencies.

However, Among noted that the campaign should also target boys since many of them end up on the streets as a result of gender-based violence. She encouraged the leaders to lead the campaign of sensitizing the masses.

The Minister for gender labor and social development Betty Amongi noted that many girls have been forced to drop out of school and get married at an early age due to gender-based violence.

The UWOPA chairperson Sarah Opendi who is also the Tororo district woman MP noted that much as the laws against gender-based violence are in place they have failed to address the challenges of GBV due to lack of implementation.

Meanwhile, civil society organizations under the umbrella of the Domestic Violence Act Coalition have also launched the 16 days of Activism campaign against gender-based violence in Kampala under the theme of “UNITE Activism to End Violence against Women and Girls. They plan to roll out activities to scale up awareness of violence and prevention.

They have also decried weak laws and policies to protect the female gender against violence and the lack of government commitment to implement the existing laws.

According to statistics from the Uganda Bureau of Statistics of 2022, 51% of women between 15-45 years of age have experienced some form of violence at some point additionally,55% and 31% of women have been exposed to sexual and physical violence from non-intimate partners.

They called upon the government to allocate funding towards the implementation of violence against women and girls prevention and response laws and policies.