Minister To Give Statement on BoU Saga 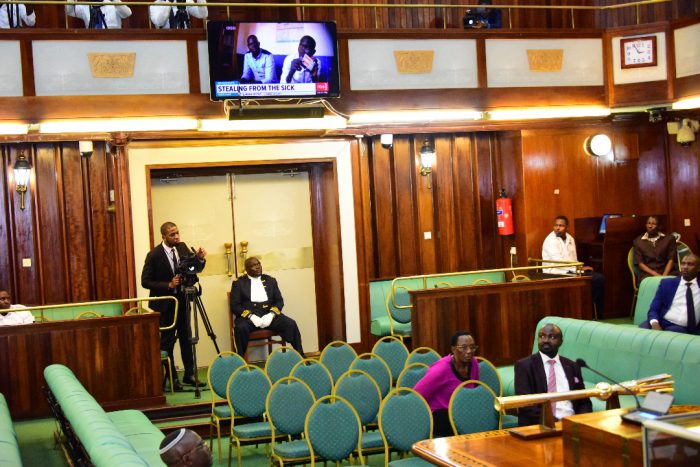 Government to give an interim statement on the Bank of Uganda saga on Tuesday next week, the state minister for planing economic development David Bahati has said.
This after MPs demanded government to explain the ongoing allegations, that some officials from bank of Uganda could have printed extra money amounting to 90 billion shillings, loaded on the chattered plane.

According to Minister Bahati, there was an air cargo with Ugandan currency together with other extra items however the matter is still under investigations by the anti-corruption Unit of State house headed by Lt col Edith Nakalema and the CID.

However, some members of parliament are not satisfied with the way events keep on unfolding at Bank of Uganda. The MPs who include Geoffrey Macho MP Busia municipality who raised the matter on the floor of parliament, others including MP Cecilia Ogwal, Ssemujju Ibrahim Nganda and Patrick Nsamba have asked parliament to interest itself in the matter because it touches the integrity of the central bank and the the economy of the country.
According to Patrick Nsamba, Parliament must ask the minister to give them a certain period of time to come back and report to parliament on the saaga.

He says the saga started as a currency matter ,but it has now become a cargo ,the other time it will be an item, next time it will be something else ,therefore called for independent investigation into the matter.

MP dokolo county woman MP Cecilia Ogwal wondered ‘’who is investigating who’ regarding the saga ’she goes ahead to call for independent investigations into the matter to prove that government is still in control of the country because of the contradicting statements by both the government spokesperson Ofono Opondo who says there is no money and yet the spokesperson of police Fred Enanga says it is true there is money in circulation.

The opposition chief whip Ibrahim Ssemujju Nganda says the officials at BOU are sleeping at their job especially the governor of the bank himself Emmanuel Mutebire who has resorted to asking state house for help meaning he is helpless.

However, minister Bahati has assured parliament that on Tuesday next week, government will be giving an interim report on the matter and has also cleared the air that the matter at hand will not affect the country in terms of inflation.

Last week on Friday the anti –corruption Unit of state house headed by Lt Col Edith Nakalema raided Bank of Uganda and arrested five officials for printing their own money. Dr Barenzi and other officials allegedly printed money to a tune of 90bn in excess and used some of it to buy goods which were all loaded into the chartered plane.