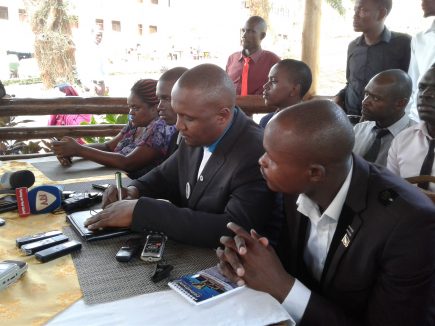 Health professionals under their umbrella body, Uganda Medical Association are planning to petition H.E. YK. M7 over the plans to construct a new specialized hospital at Lubowa.

Addressing a joint press conference in Kampala today, the doctors led by their president, Dr. Ebuku Ekwaru and the secretary general of the association, Dr. Muhereza Katongole are also calling for a thara evaluation into the total cost for the project on grounds that the prices are highly inflated when compared to other similar projects in and out of the country.

Ekwaru further notes that its very sad to see govt borrowing billions of dollars for a foreign investor to construct the facility leaving national health facilities with no equipment to use to offer health services to citizens. He further equated the act to funding a new expensive slay queen and abandoning the old lady who then turns jealous.

However, Dr. Sulaiman Lubega, a cardiology consultant at the heart institute together with Dr. Henry Ddungu an oncology consultant at the cancer institute are both blaming the govt for the poor services provided to patients at the institutes, advising that the money to be lent to the investor should have been allocated to the two institutes so that they can acquire the needed equipment to offer better and specialized treatment like bone marrow transplant, acute leukemia treatment among others which the proposed new hospitals wants to offer.

The heart institute presented a UGX.2Bn proposal before govt which is meant to operationalize the institute to better serve the public, which proposal has been kept on the shelves for over seven years now.

On a related development, Grace Ssali Kiwanuka an economist who doubles as the executive director, Uganda healthcare federation urges govt always to sit and discuss matter with players in the sector before taking further action most especially when it comes to such projects.

Ssali says, the move seen as a blessing to the country will later be seen as a curse to the nation and mainly to the tax payer.

Uganda seeks to help finance the Lubowa specialized hospitals project owned by foreigners to a tune of USD.379M which plan has raised concerns among a scope of Ugandans.