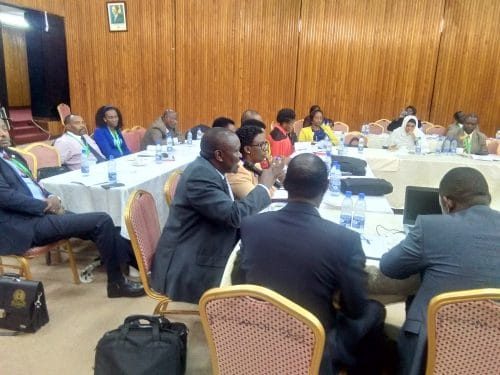 Uganda’s Representative at east African legestilative assembly, Matthias Kasmaba has been elected by Eala members of parliament to head the committee on agriculture and, tourism and natural resources for next two years.

Immediately after his election by Eala MPs from all member states, Hon Kasamba said that, his committee is going to focus on the quality and availability of food in the east African countries, because that there are still many areas in the region without enough  food.

“Am really much honored that the people of east Africa through their representatives from the partner states,   have identified me as one of the chairs, who is going to lead very important committee, and it’s a big tall order which am taking on because east Africa is a region with almost 175 million people and the most important role of any leader in east Africa that people enjoy 2-3 meals a day, on Kasamba noted.

He said it’s still unfortunate to see some  areas in east Africa going without food, that are disaster prone, while other regions have abundant food ,but lack system to distribute and harmonize ways to make sure  that everybody access  food in the  right quality and quantity Hon Kasamba explained.

He noted that one of the biggest cardinal roles of the committee he has been selected to head is to improve the availability of food for every east African through agriculture.

He added that the east African community is blessed with oil and other resources which can improve the quality of live hood of the people of east Africa, therefore the committee on Agriculture and natural resources and tourism which can enhance resource utilization and relaxation and resource sharing.

He also added that some of the natural resources, like lakes in the region are being depleted, because of the bad agricultural practices and and cutting of trees as means of energy, are part of the agenda of the committee to scrutinize in order to harmonize appropriate technologies to improves the practices in lake victoria as well as excessive agricultural open up activities along the banks.

Before joining the legestilative assembly, Hon Mathias Kasamba, represented the people of Kakuuto County in rakai district, and as a passionate agriculturist, he was also appointed by the national resistance movement NRM party in the national parliament of Uganda, to chair the same committee on agriculture.

The East African Legislative Assembly (EALA) is currently sitting in Kampala with an induction process for its new members.