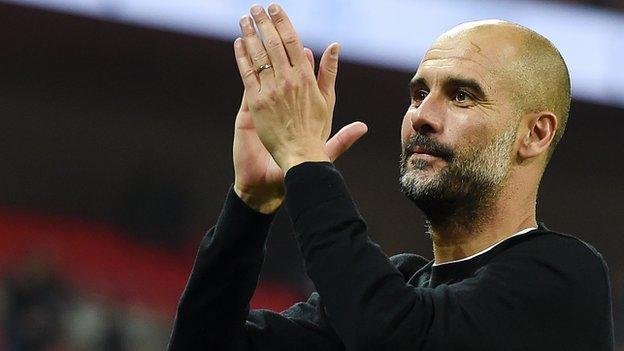 Second-place United are now 16 points behind Pep Guardiola’s side with only five games left to play.

It is City’s third title in seven seasons and a fifth top-flight crown – their first under the Spaniard in his second campaign in charge.

They have dominated the title race, scoring 93 goals and losing just twice.

The Premier League title is the 24th trophy of the former Barcelona and Bayern Munich boss’ managerial career.

The 47-year-old has previously won league titles in Spain and Germany, as well as two Champions Leagues with Barca.

City’s season so far in stats

City set a Premier League record of 18 consecutive wins on their way to the title, and have beaten every other side in the division this season at least once.

They were on course to go the whole league season unbeaten before losing 4-3 to Liverpool at Anfield in January.

Their match at Everton saw them retain 82.13% possession, the highest recorded in the Premier League, and they broke passing records, completing over 900 against Chelsea.

They have only failed to score in a league match once this season and lead the stats in terms of possession, touches, passes, shots and goals.

City were knocked out of the Champions League on Tuesday after their quarter-final defeat by Liverpool, and were beaten by League One side Wigan in the fifth round of the FA Cup in February.

However, Guardiola’s side did win the Carabao Cup by beating Arsenal at Wembley.

The week that was

City could have made history and sealed the earliest Premier League title by beating United on 7 April at Etihad Stadium, but let slip a 2-0 lead to lose 3-2.

That defeat came in between two losses to Liverpool in the Champions League, which led to Guardiola claiming the side could still miss out on the title.

However, their 3-1 victory at Tottenham on Saturday put them on the brink of the title, and West Brom striker Jay Rodriguez’s header confirmed their status as champions on Sunday.

Guardiola said on Saturday that he would play golf, rather than watch the United game.

City’s next match is at home to Swansea on 22 April.

Man City top the charts in a number of key Premier League stats this season:

Manchester City captain Vincent Kompany, speaking to Sky Sports: “I had a feeling when I woke up this morning. I don’t like to wait and see a team lose so it was different experience today.

“You can’t take [winning the league] for granted, I’ve won three now but there’s so many we’ve missed. My team-mates will roll their eyes as I want to see the reaction from us next season as I’ve never been able to retain a title.

“My favourite title is the first one. That was special.”

On Guardiola’s influence, he added:“I have learnt from him. When I was 20 I would have been a perfect player for him. Everyone that plays under him will have had success because of him, because he has the ability to unlock the full potential.”

Chris Sutton, ex-Chelsea striker on BBC Radio 5 live: “Manchester City have deserved it. Their brand of football this season has been scintillating.

“They’ve scored more goals and they have a brilliant manager. Their football on the eye has been superb and they’ve been streets ahead of everyone else.

“Old Trafford was a Theatre of Nightmares this afternoon. You’d think they’d back the derby win up with a strong performance. But they’ve handed the title to City on a platter.”

Leon Osman, ex-Everton midfielder on BBC Radio 5 live: “They definitely deserved the title. They’ve been fantastic this season, right from the start. Their performances out of the blocks in the first 10 games were incredible and they really set the tone for the season.

“[Winning at] Chelsea – a massive result away at the champions – early in the season really did put a marker down for everyone else to say we’re the team to beat. They looked at one point like they were going to go unbeaten.

“I do think they’ve set a new standard for Premier League performances and what you expect from title winners moving forward.”

Shaun Goater, ex-Man City striker speaking to BBC Sport: “For me, it’s by far the best City team I’ve seen. The way and the style they’ve gone about it is truly total football.

“City have done it in amazing style. That’s what’s been so beautiful – the way City have won this league.”

‘They paint beautiful football’ – how City have been described this season

Match of the Day commentator Jonathan Pearce described Manchester City as an “irresistible force” and one of “the best the Premier League has ever seen”.

Midfielder Kevin de Bruyne heaped praise on his own team, saying: “The way we play is probably one of the best in the world.”

Former Arsenal defender Martin Keown described City’s players as “artists” who “paint beautiful football for us each and every week”.

Chelsea manager Antonio Conte said he admired how they “found the right way to be strong for a long time”.

‘A style that is joyous to watch’ – social media reacts