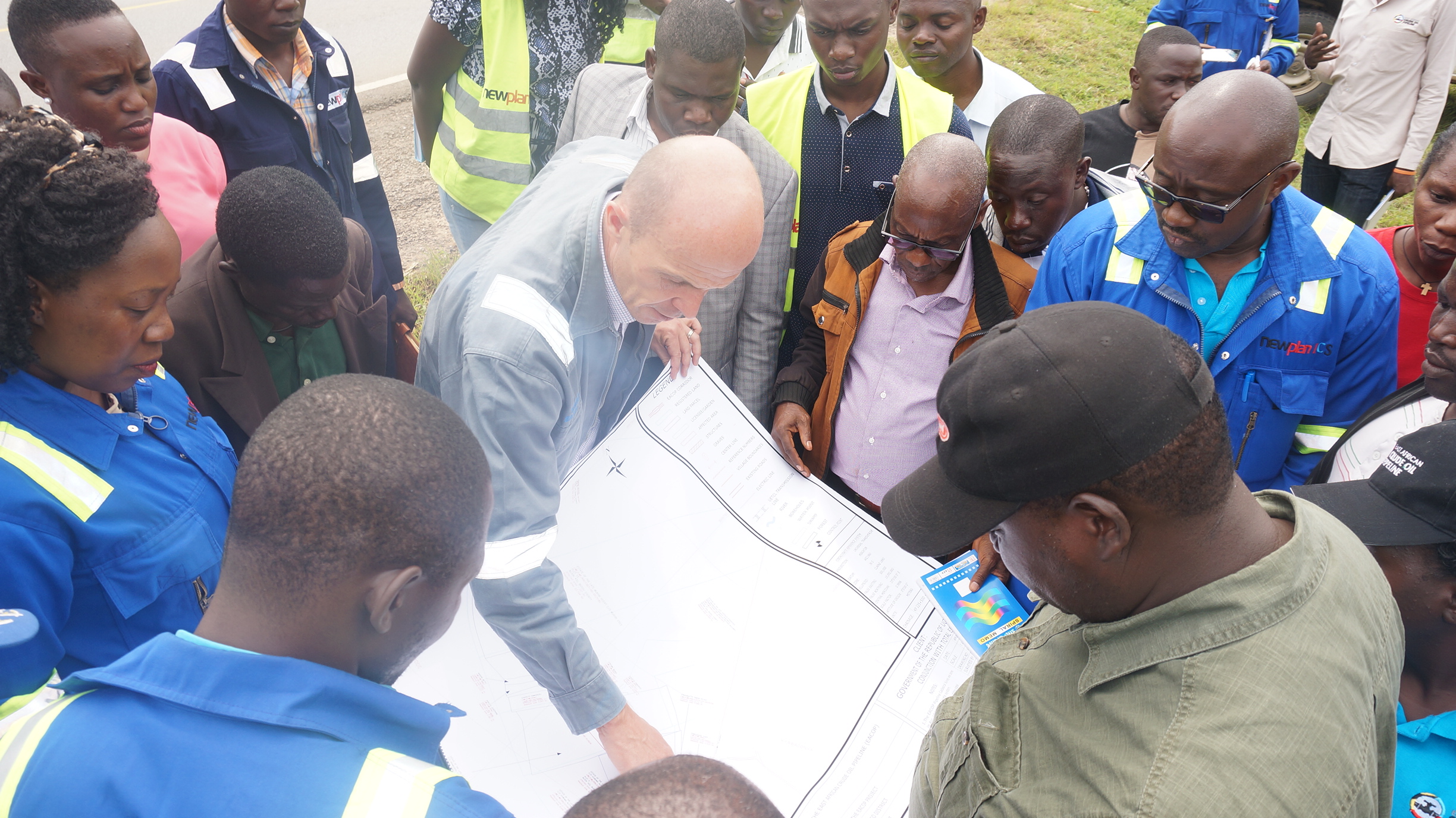 New Plan was contracted by Total Uganda to implement the mapping and valuation exercise of the project in a bid to compensate the Project Affected Persons (PAPs) to pave way for the pipeline project.

But for over seven months, the family of Late Asuman Bamudduka has disagreed with the company over its intentions to route the pipeline through the burial grounds.

The said burial place is about an acre containing 60 graves of which 36 are marked and 24 unmarked. It’s protected as treasure for more than 140 members of the family.

Led by Robert Lule, the family property administrator, they want the remains on the land to be relocated altogether. According to Lule, New Plan recorded the 36 marked graves for compensation leaving out 24 others which are unmarked.

He added that the company had proposed to exhume remains from just a few graves to pave way for the project which violates the cultural and traditional values.

He further explained that two conditions were set for the company including considering the 24 unmarked graves for compensation and to relocate all the remains to a new place.

“In our culture, if the deceased family members are buried in one place, you cannot relocate one or two of them. You have to relocate all the remains at once which comes with a cost”, Lule explained, adding that the process involves disturbing the peace of the dead yet certain rituals must be performed before exhuming and relocating the remains.

He further argued that this is done to contain strong spirits that may haunt the living family members the marked graves are for deceased of the Christian faith while the unmarked belong to those of the Islam faith.

They held a stakeholders meeting at the district headquarters which was attended by different representatives.

He explained that pipeline route targets traditional or cultural sites, burial grounds, sacred places among others.

“Much as this is a government project, we must consider cultural beliefs and respect them accordingly. Therefore the discussions surrounding the burial places or graves relocation must be harmonised”, he said.

Benoit Gilbert, who represented Total, agreed to the family’s terms.

He said they will buy land elsewhere to relocate the remains of all the deceased laid on the burial place in addition to compensating for the 24 unmarked graves on condition that they contained remains.

He said that this will be done during the compensation or payment process before the pipeline construction begins officially.

Until Total and New Plan fulfills the set conditions, Lule maintained that they will not give up their burial place.

There are at least 27 families whose graves and burial places were targeted by the project. However, they were registered for relocation and compensation.

There have been several queries about the way New Plan conducted the valuation of affected properties in Lwengo, Kyotera and Rakai districts.

For the last three months, affected residents have complained to their local leaders over alleged undervaluation of their properties yet several were not considered for compensation.

At some point, some residents in Lwengo Town Council, Lwengo rural and Ndagwe sub-counties different communities protested the said irregularities associated with the valuation process.

Cosma Kyebanja, one of the affected residents in Byangiri village in Kitto parish, Lwengo Rural, told New Vision that they were harassed and forced to sign different forms without clear explanation.

He added that they were also told to fill the valuation forms with details using a pencil, and then sign in ink.

Vincent Kasajja and his wife Annet Nankasi of the same village said his house is about 13 meters from where the pipeline will pass but claims the valuers did not record it for compensation yet they will not be allowed to stay near the pipe in the future.

John Tamale Kanagoba, the Kito Parish Chairperson, reported that company’s valuers often trick the LCI chairpersons to stamp and sign empty forms which has caused doubt among the affected residents.

According to George William Mutabaazi, the Lwengo District Chairperson, they established the company did not document some of the resident’s buildings including residential houses mosque, eucalyptus trees, plus food plantations namely banana, coffee for compensation while others were undervalued.

He explained that on many occasions the company supervisors and workers secretly visit affected communities without notifying or engaged district leaders in the valuation exercise.

In Kyotera, Charles Njuba, the LC5 Vice Chairperson, the situation is a bit calm save a few complaints arising from poor valuation and delayed compensation. He appealed to the residents to remain calm as they wait to be compensated.

In Sembabule residents are still calm. According to Robert Ambikire, the Ntuusi Sub-county councilor, they are still waiting for the ministry to approve the compensation rates.

He added that initially, the valuers wanted to use the same rates with Gomba yet the two districts are different in terms of terrain and other factors.

But in the stakeholders meeting, Total officials confirmed receiving several complaints from the PAPs and local leaders about the ongoing operations especially about the valuation and compensation process.

Agnes Cabrine Nakanja, a New Plan official, explained in her presentation that EACOP takes grievances seriously and has elaborate procedure for redress.

“Whoever feels unfairly treated as a result of the project related activities should report to the community liaison officers, LC1, or members of the resettlement committee”, she said.

According to Nankanja, the project is meant to undertake 18 stages.

However, she said they have so far completed only four stages including stakeholders’ engagements, land and property assessment and social-economic survey, opening of boundaries, and land and property valuation and preparing strip maps.

She added that they are yet to embark on stage five which is displaying of draft strip maps to enable the PAPs validate the location of their properties.

“It also involves announcing the general cut-off-date for eligibility for compensation in the district. But in Lwengo, this exercise was completed in May 2019”, she noted.

However, Ssensalire urged Total to expedite the compensation to avoid creating doubt and protests.