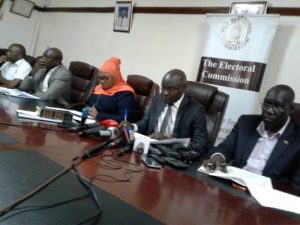 The Electoral Commission has released a road map for election of village and women council’s slated for July this year.

The elections were meant to take place in November last year but they were halted by a court case filed by one James Tweheyo who challenged the polls on grounds that they were going to leave out students who were eligible to vote and were still in school.

However, the two parties settled their matter out of court hence the case was withdrawn giving Lee way for the electoral process to continue.

In this Electoral commission has scheduled registration of voters who had not done so last year for 22nd -25th June in their respective villages.

And 27th June will be nomination of women council leaders at parish level and these are to be elected on 3rd July.

4th-5th July are nomination days for LC1 chairpersons, these will hold campaigns for four days and there after the polling for the village chairperson be held on 10th the same month. There are no education qualifications needed for the two posts, only candidates are required to be residents of the areas and citizens above 18 years.

The Chairperson of the Electoral Commission Justice Simon Byabakama is optimistic that the prevailing act of kidnaps and murder will be fought through the leadership of the village hence appealed to all Ugandans to take part in this elections.

Byabakama has further appealed to the public in areas that have been disturbed by the natural calamities including heavy rains, floods  and mud slides to consider registering in areas where they have sought refugee if they truly willing to participate in this forthcoming election.

Voting is to be conducted in 60801 villages and is expected to employee 191850 electoral officials with the exercise to cost UGX.22.1Bn.

However, civil servants are free to contest for the upcoming LC1 and women council elections, but are seriously warned against engaging in partisan politics as the political parties and organizations’ act prohibits them from doing so.

The polls commission chairman, Justice Byabakama Simon tells journalists at a press conference where he announced the road man for the electoral exercise that ,civil servants are not allowed to campaign for candidates carrying political party flags and in case they decide to contest, they should stand as independents. He also emphasizes the need to have the polling dates designated public holidays to allow student eligible for voting to exercise their right fully.