Karamoja MPs- Petition Parliament Over -Insecurity in The Region 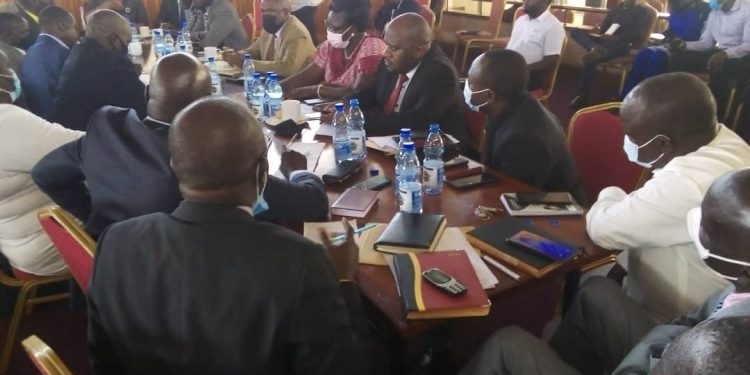 Members of Parliament from the Karamoja Subregion have petitioned the parliamentary committee of defense and internal affairs over the resurgence of insecurity and massive cattle raids.

They have called on the government to immediately intervene with clear strategies to recover herds of livestock that have been lost to the notorious Turkanas, Pokots of Kenya, and Karimajong warriors.

Members of parliament representing areas of Karamoja Subregion appeared before the committee of defense and internal affairs chaired by the Sheema district woman MP Rosemary Nyakikongoro decried the deteriorating security situation that has been mainly characterized by massive cattle rustling and loss of human lives.  Kaboong district is the epi-center losing 50,000 heads of cattle and 18,000 goats and sheep in the space of two years.

Karimajong Legislators accuse the Turkanas and Pokots from Kenya plus some Karimajong warriors for wreaking havoc in the region. They reported that scores of people flee their homes every night to camp in schools where they can get security after losing 500 lives in livestock raids

MPs also faulted the UPDF security strategy to safeguard the area, saying the army is deployed very far from the kraals, yet they don’t operate at nights when warriors mount raids

They want local leaders to be given the mandate to recruit local boys to beef up security; claiming they have established plans to withdraw UPDF soldiers from Karamoja to deploy them in the Democratic Republic of Congo to fight ADF which will rub salt in an injury.

Karamoja parliamentary group has asked for compensation for the lost livestock and Relief aid for communities that have been heavily affected by the raids and beefing up the disarmament program.