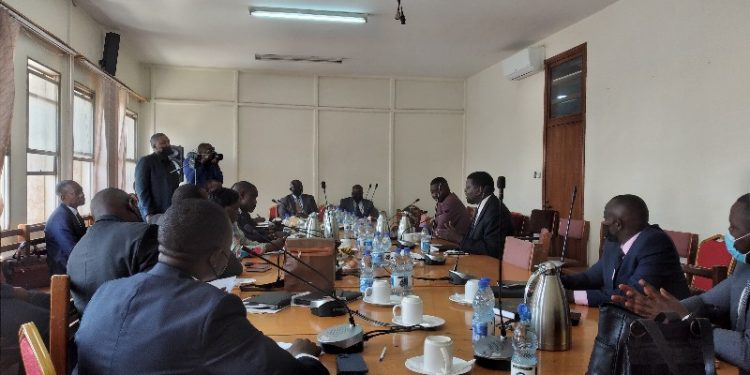 KACITA Calls for a law on Rent Waivers During Lockdowns

The Kampala City Traders Association (KACITA) has asked parliament to incorporate a clause into the Landlord and Tenants bill of 2012 which provides for rent waivers during a time of uncertainties like Lockdown.

KACITA says the Covid-19 lockdowns have killed business because landlords insisted on demanding for rent accrued during the lockdown when traders were not working. They have also beseeched the committee of the physical infrastructure to abolish charges of “Good Will” which exploit tenants.

Appearing before the parliamentary committee on physical Infrastructure which is considering the Landlord and Tenants bill of 2021, leaders of  KACITA made a case that the unending Covid induced lockdowns have put many traders out of business after their landlords demand for rent arrears accrued from the time they were not working in lockdown.

They believe the law can help to guide on way forward in such circumstances when both landlords and Tennant face stalemate. They propose measures that rent accrued during the period when Tennant’s are not working can be forfeited, cost-shared, or catered for by the government that imposed lockdown.

KACITA has also implored the committee of the physical infrastructure to legislate of “Good Will” charges which landlords charge Tenants before letting them space. They claim such charges are too high and deprive Tennant’s of the capital yet they are not receipted. The KACITA spokesman Issa Sekitto told the committee that arcade owners charge between 20 to 40 million shillings under goodwill which does not form part of the rent and asked the committee to either prohibit the charges or legalize it.

Traders have also called for tough clauses in payment of utilities, accusing landlords of using utility bills as money minting ventures. They cited bulky electricity metering where landlords charge Tenants exorbitant costs of electricity which doubles the normal costs. They also called upon parliament to prohibit landlords who charge toilet fees from their Tennant’s

The Landlord and Tennant bill bars landlords from an arbitrary increase of rent, providing a ceiling of not beyond 10% in a year. It also bars charging of rent in dollars which KACITA supports.