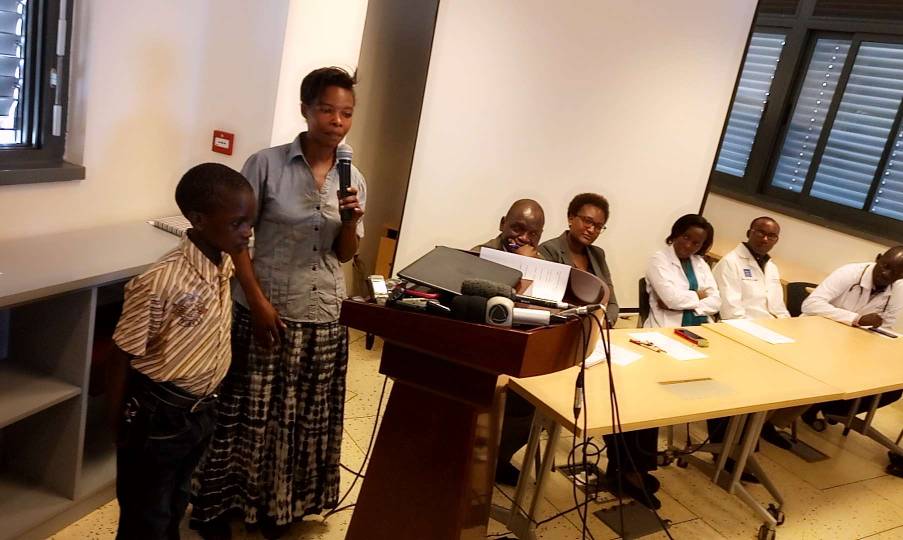 JOY AND HAPPINES ON KABANDA, MOTHER  A CANCER SURVIVOR AT 10

It started with sorrow, pain to hardship in life in that they could not afford transport, medical bills and feeding, as a one Nakagumu Mary a mother to Kabanda David, aged 10 now, a child cancer survivor and studying at Winners junior school, Masaka district.

Narrating a five year story between the two, Nakagumu says, she visited Kitovu hospital in Masaka for treatment on several occasion to still a mysterious disease that kept changing faces, and it’s here where she was referred to mulago for further examination and treatment, on realizing that Kabanda was having cancer at the age of five. Presenting with pains, lack of blood, swollen stomach, thin legs and always crying out for help.

At the cancer institute where they spent close to five years while receiving series of treatment, Kabanda finally got better and is now back in school and living a happy life just like any other child in their village.

However, Dr. Joyce Balagadde Kambugu a pediatrician at the Uganda cancer institute who was part of Kabanda’streatment team refers Kabanda’s case to the 7000 new cases registered in the country but only 512 (10%) of those new cases are reported to the cancer institute annually leaving many cases un attended to.

Dr. Balagadde notes that childhood cancer is highly curable with chances standing at above 95% in developed economies and 10% curable chances in low developed economies like Uganda attributing the low curable cases to limited funding and research into the cancer department and health sector as a whole.

She confirms that with the modern facilities now at their disposal, well trained experts, cancer cure among children in Uganda has improved to slightly above 50%.

Meanwhile, the executive director Uganda cancer institute, Dr. Jackson Oryem reveals that between march to may 2017the institute treated 23 children who are now living a normal life but calls for more support from all well wishers to the institute to increase on its capacity to offer better and quality treatment as well as spread their wings to different parts of the country as planned.

Directors at the cancer institute plan to set up regional centers in the north, east, west and westnile and they will be offering service to cancer patients with complicated cases referred to Mulago cancer institute.

Experts urge parents always to look out for signs like, non stop bleeding, pains, swellings among other signs and visit health facilities for further check up.

Tomorrow, Uganda will be joining the rest of the world to mark the world child cancer day.