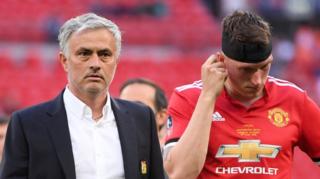 Manchester United manager Jose Mourinho says Chelsea did not deserve to win the FA Cup, accusing them of “defending with nine players” during the final.

The Blues lifted the trophy for the eighth time as Eden Hazard’s first-half penalty earned a 1-0 win at Wembley.

But Mourinho said: “I think we were the best team, but that is football.

“I am quite curious to know what you say or what people write because if my team plays like Chelsea did, I can imagine what people would say.”

United did not have a shot on target in the first half on Saturday but were much improved after the break, as Thibaut Courtois superbly denied Phil Jones’ header before Paul Pogba nodded wide when unmarked.

“I congratulate them but I don’t think they deserved to win,” said Mourinho, who has had two spells in charge of Chelsea.

The 55-year-old Portuguese felt his side missed the physical presence of Romelu Lukaku in attack, with the Belgium striker having started on the bench after recovering from an ankle injury.

“It was a bit hard for us to play without Lukaku against a team that defends with nine players,” added Mourinho. “You need that presence.

“Chelsea are not stupid. They know our team without Lukaku or Marouane Fellaini does not have a presence – so putting eight or nine players in front of the box they knew they would be dominant in that direct football.

“Every defeat hurts but I go home with the feeling we gave everything. No regrets.”

“We tried to defend well,” said the Belgium forward.

“We kept a clean sheet; we scored one goal. It is enough today but if we want to win a lot of games we need to play better because we had to play defensively.”