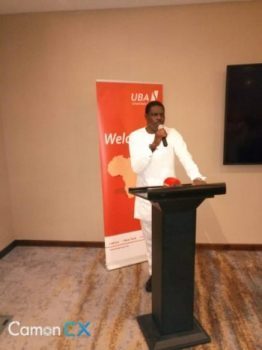 By Adiga Julius and Acaye Henry.

“We plan to introduce new products and services that will transform the industry, we are confident that with these developments and the customer at the center of it all, we shall achieve our goal of market dominance Mr. Agoreyo said.

Agoreyo says UBA is focusing on an excellent customer experience, majorly targeting the youthful customers, with new products such as mobile banking, agency banking among others.

According to bank rankings in Africa, the United Bank for Africa (UBA) has the financial capacity of its large group to finance large tickets transactions and can design the products specific to the customer’s unique needs in sectors such as Infrastructure, Agriculture, Oil and gas.

According to Mr. Agoreyo, the united bank for Africa has embarked on forming strategic partnerships with the various Ministries and departments of Government, such as the Ministry of Finance and Economic development, Ministry of Agriculture, Animal industry and Fisheries and the Uganda Revenue Authority.

He added that united bank for Africa is to further contribute   to the development of Uganda by financing key Government projects.

Meanwhile the (UBA) head group, Media relations and external relations Mr. Ramon Nasir, said (UBA) is a Pan African bank with operations in 20 countries and 3 global financial Centers in New York, Paris and London, which therefore has the capacity to be a leading bank in Uganda.

“We have the resource and experience around the continent, to change the face of banking in Uganda Mr. Roman noted.

He further disclosed that the United Bank for Africa (UBA) is the only Africa bank in United States of America, treated as regulatory frame work, which shows how big  (UBA) is, with a total asset of close to 15 billion dollars, 5 times bigger than most Kenyan banks.

“We are one of the top 500 banks in the world, there is no transaction that this group has no capacity to undertake Mr. Ramon noted.

He said that (UBA) group is ready to help the African countries to grow and develop, nothing that (UBA) is capable to take on any challenge.

United Bank for Africa (UBA) started operations 10 years ago and over the years has expanded to serving customers in over 11 branches, 1 Redshop, 12 ATMs and over 250 POS machines across the country.

The Bank has an extensive service offering that includes Wholesale products, retail products and digital products.

Entebbe Police are holding a man for illegal gun possession.