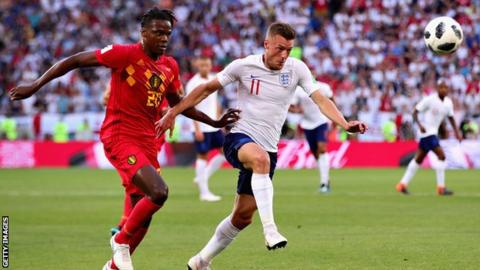 Striker Jamie Vardy is stepping aside from international football to allow England manager Gareth Southgate to bring younger players in.

But the 31-year-old – who scored seven goals in 26 international appearances – and Southgate have agreed to “not shut the door completely”.

Leicester City’s Vardy says he first told Southgate of his intentions at the World Cup in Russia.

“This has been on my mind for a while,” Vardy told the Guardian.

“I’m not getting any younger and you can see, to be fair to the gaffer, he wants to make it more youthful, which obviously had its benefits during the World Cup.”

Vardy, who made his England debut against the Republic of Ireland in June 2015, made four appearances for England at this summer’s World Cup, where they reached the semi-finals.

He has told Southgate he also wishes to concentrate on his club football and his family.

“Gareth said that he felt I still had a lot to offer, and we’ve not shut the door completely,” he said.

“If the worst came to happen and everyone was injured, then obviously I wouldn’t say no.”