It Was Indiscipline For Kadaga to Stand As Independent-Lumumba 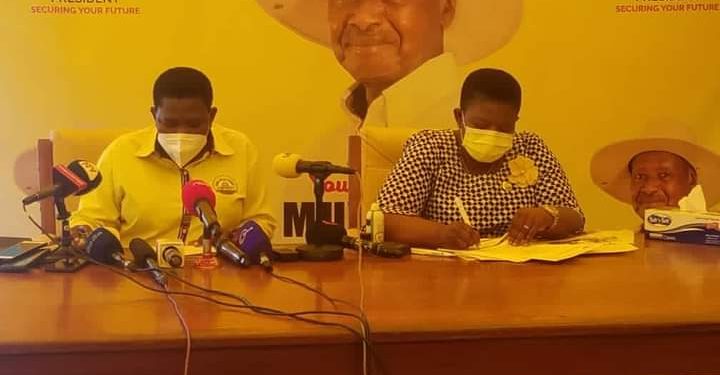 The Secretary-General of the ruling National Resistance Movement-NRM Justine Kasule Lumumba has said the former Speaker of Parliament Rebecca Alitwala Kadaga should face the party’s disciplinary committee for having gone against its rules and contested as an independent for the office of the speaker of parliament.

On Monday Kadaga was defeated by her former deputy Jacob Oulanyah with 310 votes against 197. A day before the Monday vote, the Central Executive Committee, the second topmost organ of the Party, had chosen Oulanyah to be the party’s flagbearer to the disappointment of Kadaga.

She told a hastily arranged press conference in Kampala that she was being edged out of the party for being vocal about issues that concern people. But Lumumba said for the four times that the party chose Kadaga as their candidate twice as a speaker and twice as deputy speaker, they were aware of her rhetoric.

Lumumba said they will not institute disciplinary procedures against Kadaga who holds the third topmost position in the party as Second National Vice Chairman until somebody officially complains about her actions. She said the party constitution provides a plethora of sanctions for members who veer off the correct line.

On Friday, CEC is expected to sit at State House Entebbe to evaluate Monday’s elections and also appoint the MPs who will represent the party on the Parliamentary Appointments Committee that vet presidential appointees.  President Museveni is expected to forward names of people he has appointed to the cabinet to parliament so that they are vetted before next week’s State of the Nation address.

Kadaga according to Lumumba is one of the members expected to attend the meeting.

Lumumba called upon Oulanyah and his deputy, Anita Among not to ever forget that positions they now hold are deployments by the organs of the party and that they should hold them in their trust.

“It is the expectation of the National Resistance Movement that you will provide the necessary strategic leadership in parliament and that you will support and work in close liaison with the other branches of government in fast-tracking the social-economic transformation agenda for Uganda,” Lumumba said. She added that the election of the speaker tested the cohesion and unity of their party but they emerged victorious.