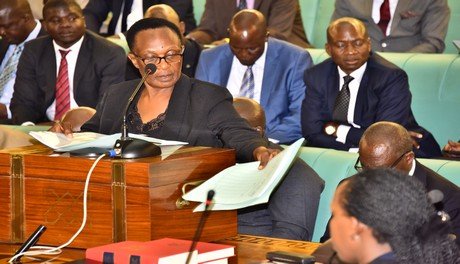 Members of Parliament have called on Government to improve the welfare of its officials serving in several missions abroad.The MPs raised the concern following the presentation of the report of the Foreign Affairs Committee by the Chairperson Hon. Rose Mutonyi (NRM, Bubulo West County), on the Ministry policy statement for the financial year  2018/2019.Hon. John Baptist Lokii (NRM, Matheniko County) said that officials at several missions abroad were working under difficult conditions, yet nothing was being done to improve their status.“We visited Uganda’s embassies in Ethiopia and Mombasa but the ambassadors there could not meet us because they faced many challenges. Government should come up with a charter to guide their work,” said Hon. Lokii.Hon. Lucy Akello (FDC, Amuru) commended the renovation of missions abroad, citing the one in Kigali that was well set up, noting that it offered good publicity  for Uganda.She also called for the establishment of missions in countries where most Ugandans were being employed, with the need to recruit labour officers in the given countries.“The report talks about Doha in Qatar and  Dubai which are the countries that employ most of our young people,” noted Hon. Lucy.The Committee also expressed dissatisfaction with the appointment of non-career diplomats as ambassadors in the various missions stating that out of 35 ambassadors or heads of missions, only six are career diplomats representing 17.1 per cent.“At one time in Washington, one of the officers was declared persona non grata because he could not measure up to the standards of a foreign service officer,” said Hon. Emmanuel Ssempala (Makindye-Sabagabo Municipality).“After vetting of these appointees, the ambassadors should be taken for training in diplomacy,” added Hon. Susan Amero (NRM, Amuria).The Speaker of Parliament, Rebecca Kadaga noted that the House was not impressed with planning as regards to the state of missions abroad, and called on the Ministry of Finance to cater for them since they remitted over Shs 76 billion between 2013/14 and 2016/17.“I have never understood the rationale of renting office space for 50 years. The money we have spent on renting would have bought us many buildings,” noted Kadaga.The State Minister for Finance(Planning), Hon. David Bahati said Government has availed funds to facilitate the rehabilitation and establishment of the missions abroad.By Parliament Press.

The Minister of State for Foreign Affairs Hon. Okello Oryem said that Uganda has competent officials serving at foreign missions, but noted that Uganda had no labour agreements with the United Arab Emirates, where many Ugandans were being employed.The committee report that has been adopted by Parliament indicates that opening of new missions in a phased manner strategically for Uganda’s interests remains top priority.The Committee cited the opening of missions in Lusaka, Brazilia, Havana and Seoul as well as consulates in Goma and Dubai.