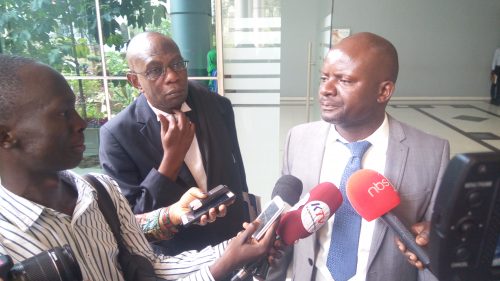 Hearing of Case Against UPDF MPs Adjourned To – 19th September

On 6th 2011 Ellady Muyambi filled a petition in the constitutional court of Uganda against the attorney general of Uganda challenging the representation of UPDF in the Parliament of Uganda which he claims to be unconstitutional. But seven years down the road, the hearing of the petition has not kicked off. Even today when it was fixed for hearing, it flopped on communication that some justices on the panel had gone to attend funeral of a mother of one of the high court judges.

Ladisluas Rwakafuzi, the petitioner’s lawyer noted that UPDF representation in Parliament ceased relevance and legality in 2005 when Uganda endorsed multi party dispensation meaning soldiers in Parliament became politicians. He added that even in the recent constitutional amendment of article 102(B) all ten UPDF representatives sided with NRM party in supporting the age limit removal .

Muyambi vowed not sit and watch when UPDF continue to lose features of national character as its representatives are being appointed ministers in NRM government like Gen. Elly Tumwine the minister of security and Gen. Katumba Wamala the state minister of Works which directly involves them in partisan politics.

The case has been adjourned by Justice Kenneth Kakuru to 19th September this year for hearing.