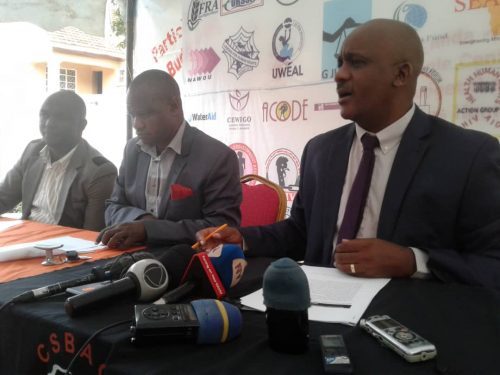 Civil society organization under the accountability sector, CSBAG are demand that govt comes up with a clear roadmap to rationalizing it agencies and commissions to avoid mistakes.

According to the national coordinator, CSBAG, Julius Mukunda, govt should provide a strong roadmap on how the restructuring is to be implemented, noting that out of the 69 agencies, commissions and authorities as well as boards to be rationalized.

He further demands that govt clearly reveals which specific agencies it is to start with and for how long with clear timelines detailing the activities to be undertaken in rationalizing the agencies, commissions, authorities and boards.

Being aware that several laws will be repealed and even the constitution will require amendment, its very important for government to ensure that the road designed will take care of the legal issues that will arise of the rationalization process.

CSOs still express their happiness to government for that this has been a massive campaign from their side tasking government to rationalize the agencies, commission and boards which are a burden to the Ugandan tax payer.

And the executive director, African leadership institute, David Pulkor who also welcomes the new idea, wants govt not to only merge technical departments but also merge or scrap political department, mainly in state house, ministries and also reduce on the size of parliament which he says are consuming too much funds which would have been used to fund basic priorities that would benefit the citizens.

Lydia Kobusingye, the programs officer at NUDIPU vows to mobilize PWDs across the country to see to it that the national disability council is not merged.

Since the financial year 2015-19, govt has lost UGX.2.293Trn in wages and non wages and with the merging of these agencies, commissions, authorities and boards, govt projects to save, UGX.969.8Bn which will then be allocated to funding other programmes.

Govt emphasizes that the rationalization of these entities is aimed at avoiding duplication of roles and duties, slash on expenditures, enhance efficiency among others for better service delivery.

Cancers 'rising around the world'