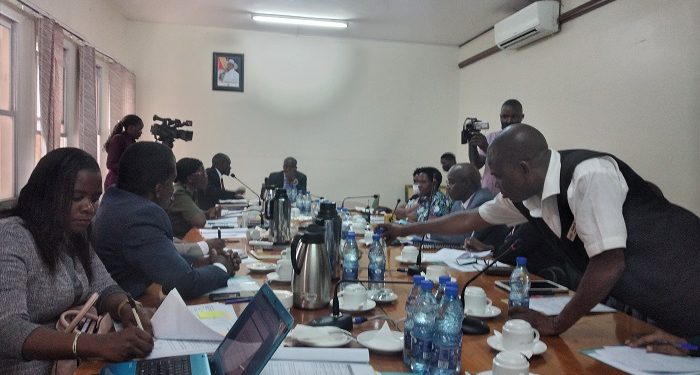 Mulago Spends Shs700 on Feeding a Patient Per Day.

Members of the Health Committee have questioned the capacity of Roko Construction Company to undertake the Shs13.819Bn renovation works at Mulago National Referral Hospital, having been awarded the contract in 2014 and expected to complete works in 2016.
The committee also noted concerns about the quality of food given to patients after learning that Mulago spends Shs700 on feeding a patient per day.

This followed a follow-up meeting the Committee held with officials from Mulago National Referral Hospital after an initial on-site visit to the facility in September 2022 where they discovered that despite signing a contract to undertake the works in 2014, Roko Construction Company had abandoned the site and only returned following the oversight of Parliament on 7th October 2022.

Charles Ayume the Health committee chairperson (Koboko Municipality) wondered why it took the intervention of Parliament before Roko Construction Company would resume works, that have delayed the elevation of Mulago Hospital into a super specialized hospital.

According to Rosemary Byanyima, Acting Executive Director of Mulago National Referral Hospital, Roko Construction Company was awarded the contract to renovate Mulago and the scope of works involved carrying out Civil works Shs2.094Bn, Air conditioning Shs1.309Bn, Electrical installation Shs1.361Bn, plumbing works Shs1.420Bn, medical gases Shs717.335M, ICT installations Shs2.467Bn and other items totaling to Shs13.819Bn. However up to date, works are yet to be completed, yet the Ministry of Health that oversaw the award of the contract went ahead and struck another deal with Roko Construction.

The development angered MPs who wondered why Government has continued to award contracts to Roko yet there is glaring evidence of the Contractor failing to finish works within stipulated timelines like new Parliament Chambers.

The Health Committee has resolved to hold a joint meeting between Roko Construction Company, Mulago National Referral Hospital as well as Ministry of Health on the delays to complete the renovation works.

Meanwhile, MPs on the Health Committee have learned with shock that Mulago Hospital spends only Shs700 on feeding patients per day. Dr. David Nuwamanya the Principal Administrator of Mulago National Referral Hospital explained that with 700 shillings they can only afford to feed patients with Posho and Beans.

MPs were concerned with the quality of food given to patients who need highly nutritious food to support drugs in the healing process. The committee wants the budget to be enhanced to at least Shs1500.

The Committee of health also queried Mulago Hospital bosses over allegations of bribery at the National Referral. Ayume noted that there is syndicated corruption going on at Mulago with private laboratories sneaking their samples into the facility without paying for services.