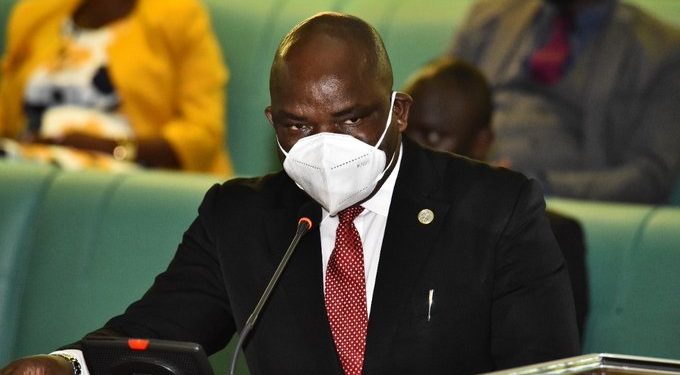 Parliament has urged the government to find a lasting solution to the sporadic power outages in the West Nile region.

The House on Thursday adopted a motion urging the government to immediately address the electricity supply challenges in the West Nile region. The motion was presented by Hon. Lawrence Biyika, the Ora County MP.

In his motion, Biyika urged government to urgently provide funds to the Uganda National Oil Company (UNOC) to supply fuel to ELECTROMAXX, for them to generate the licensed 8.2 megawatts of electricity to be supplied to West Nile Rural Electrification Company (WENRECO) for stable electricity supply.

To address the power shortage in West Nile which has never been connected to the national grid, government in 2003 granted a concession agreement to the WENRECO to generate, distribute and sell electricity for 20 years.

Another company, ELECTROMAXX was introduced to supplement power generation in the region following the constant failure to supply electricity by WENRECO.

Biyika in his motion tasked the Ministry of Energy and Mineral Development to fast-track the evacuation of electricity (132 KV line National Grid) to West Nile and also speed the work at the substations in Arua and Nebbi districts to enable the region to get connected to the national grid.

POOR SERVICE: Hon. Lawrence Biyika called for a forensic audit of ELECTROMAXX operations as he presented the motion.

The motion also called for a forensic audit of the operations of ELECTROMAXX to ascertain whether Uganda had obtained value for money for the period ELECTROMAXX has operated in West Nile.

“A compliance audit be carried out on Electricity Regulatory Authority (ERA) about the operations of ELECTROMAXX and WENRECO,” the report reads.

The motion also urged the government to release all the required funds to speed up the completion of the 6.6 megawatts at Nyagak 111 and replace the second turbine at Nyagak to generate a 3.5 megawatts installed capacity instead of the current 1.7 currently being produced.

The MPs present in the House unanimously seconded the motion, and debated in its favor, calling on government to resolve the power challenges in the West Nile region.

Hon. Geoffrey Feta, the MP for Ayivu Division East in Arua City, said that insecurity in the Central Business District in Arua has risen because of the lack of electricity.

“ELECTROMAXX does not have the capacity to generate electricity; they have consistently run out of fuel. ELECTROMAXX has got fuel from local suppliers and failed to pay,” he said.

The Deputy Speaker, Thomas Tayebwa, said that the matter of electricity in Arua has been long overdue and has been on the Floor of Parliament for a long time.

“The information I have is that whereas they were charging money for eight megawatts, they were supplying only five megawatts. Later, ERA discovered that these people were being paid for the electricity they were not supplying,” Tayebwa said.

The Deputy Speaker tasked the Committee on Environment and Natural Resources to travel to West Nile next week so that the issue of power can be sorted once and for all.

He also tasked the energy minister to assess how much was invested in ELECTROMAXX compared to how much electricity they supplied.

“The committee should hold a hearing. You hear from ELECTROMAXX and the owners of Nyagak Power Dam. We want you to study the agreement and we want you to know if it is being implemented to the letter.” Tayebwa directed.

He asked the committee to proceed quickly and work with guidance from the Attorney General.

Dr Noah Musa, the Koboko North County MP, said that while working in hospitals in West Nile 10 years ago, power blackouts often affected the quality of care accorded to patients sadly. He was saddened that the trend continues to date.

Hon. Esther Afoyochan, the Distarict Woman MP for Zombo said that as MPs, they ably execute their roles but are frustrated by the lack of services citing an example of how their efforts in setting up a tea factory in Zombo were being thwarted by lack of electricity.

“While we are trying to solve the factory issue and almost succeeding, we now have the power issue. I pray that this time around, we get a solution that can work for our people,” she said.

Hon. Charles Onen, the Laroo-Pece MP said that the services of the electricity providers in West Nile should be terminated and another competent firm awarded the contract.

Judith Alyek, the Woman MP for Kole district said that if electricity was stable in West Nile, poverty would have been eliminated. She says that affirmative action needed to be accorded to West Nile, adding that no region should be left behind as far as equal opportunities are concerned.

“In Koboko where I come from, “We only switch on street lights on big days because we don’t have enough finances to cater for lights on the streets, you can imagine the level of insecurity in west Nile Hon Sharifa Aate explained.

Member of Parliament for Teregu Joel Leku said that one of the challenges with ELECTROMAXX is lack of supervision by ERA, saying they are sleeping on the job.

He suggested that since Oluyo station is already energized from Kampala, let it be evacuated across the Nile to WENRECO to supply the region.

Arua central Division MP Atima Jackson one of the seconders of the motion said that power supply  in west Nile by ELECTROMAXX and WENRECO has caused serious damage in that region.

Adding that the unstable supply of power has led to the closer of many businesses like milling machines and welding among others, which  he said is a threat to the social economic transformation of parish development model.

Nebbi Woman representative Agnes Acibu called on the ministry to save the image of the government since west Nile is pro NRM government by providing reliable electricity in the region, noting that many things have been promised but not filled by the government.

Ayivu West MP John Lematia said people from west Nile have always been deceived during elections that if they vote NRM power will come which is not the case.

“If you see the percentage of MPs from west Nile we are all NRM, with exception of two, so we continue to wonder, time will come we shall not be deceived anymore,” Hon Lematia noted.

Hon. Ruth Nankabirwa, the Minister of Energy and Mineral Development, acknowledging that the issue of electricity in West Nile had been a grave concern since the 8th Parliament, said government will amend the contract with ELECTROMAXX.

She committed to make sure there is reliable power supply to the people of West Nile especially after the completion of the 6.6 MW Nyagak III Hydropower Project.

The minister revealed that a final solution will be found in March 2023 when the government imports turbines worth Shs22 billion, money not currently available.