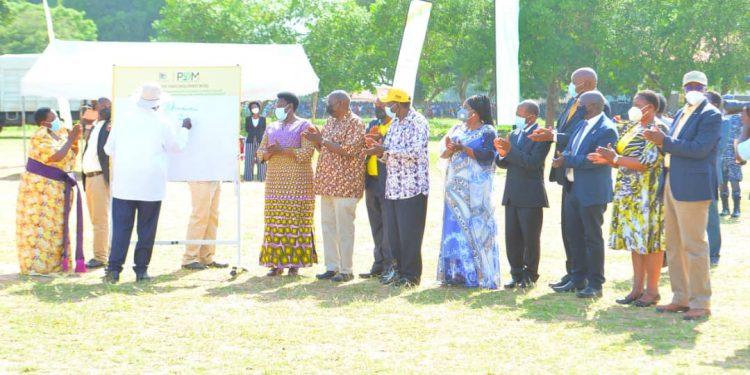 The Parish Development Model, a program meant to eradicate poverty through the execution of development activities at the parishes has been officially launched by President Yoweri Museveni.

The 490 billion Shillings Parish Development Model, replaces Emyooga, a presidential initiative on wealth and job creation, which was rolled out in October 2020 to support among others, market vendors, welders, taxi drivers, boda-boda riders, women, and restaurants owners who come together in form of SACCOS.

It is an extension of the approach to development as envisaged under NDP III, with the Parish as the lowest administrative and operational hub for delivering services closer to the people and hence fostering local economic development. There are over 10,594 parishes in the country.

The launch of the program also operationalized parish Savings and Credit Co-operative Societies (SACCOS) through which people will be able to obtain financing for development. 27 SACCOs in Butebo district received the PDM money during the launch held at Kibuku Primary school in Kibuku district on Saturday.

Speaking during the launch, President Museveni said that the Parish Development Model is centered on eradicating poverty through agriculture, even though he acknowledges that this is not the only way out of poverty. He is optimistic that since the chain of bureaucracy has been broken by taking money closer to the communities, the government will see better results.

Museveni also asked political, cultural, and religious leaders to sensitize Ugandans against land fragmentation noting that the community should invest in colonial coffee which he said is one of the activities for intensive agriculture alongside the growing of citrus fruits, dairy, pig, poultry, and fish farming that benefits both small and large scale farmers.

On the issue of rice farming, the president encouraged leaders within the Eastern region to guard the people against growing rice in the wetlands and venture into fish farming noting that the swamps are drying up because of rice farming.

Raphael Magyezi, the Minister for Local government said that the government has been on the ground to tell the people that although the region has an acute shortage of land, they can still be able to produce even with a small piece of land.

Kibuku district Chairman Haji Muhammad Nakeba said that he is convinced that the program will alleviate poverty and propel Ugandans from subsistence farming into the money economy. But he adds that the success of the program will depend on a healthy population and asked for the upgrade of health center IVs like Kibuku, Budaka, and Butebo Health to hospital status.