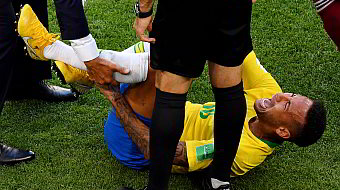 A thrilling World Cup came to its conclusion as France beat Croatia in Sunday’s final in Moscow, but there have been plenty of unusual incidents on the pitch and on the sidelines in Russia.

Here, we look at five of the best offbeat stories from the 2018 World Cup:

Maradona’s two-fingered salute
Diego Maradona will always be remembered as one of the greatest players of all-time for his exploits in 1986, but he became an increasing attraction for ridicule in Russia.

The 57-year-old made an obscene gesture from the VIP box to celebrate Argentina’s dramatic 2-1 win over Nigeria which sent them into the last 16, drawing plenty of criticism.

He still managed to keep himself in the limelight even after his country’s exit at the hands of France, claiming that he would turn the team’s fortunes around if named coach, and then being rebuked by FIFA after ranting about the officials following Colombia’s loss to England.

Arsenal midfielder Xhaka and Liverpool’s Shaqiri trace their roots to Kosovo, a former province of Serbia where thousands were killed and tens of thousands more chased from their homes during a 1998-1999 conflict between Serbian forces and ethnic Albanian guerillas.

Anything Diego can do, Robbie Williams can too
The tournament kicked off with Russia’s 5-0 thrashing of Saudi Arabia, but it was former Take That star Robbie Williams who grabbed headlines for showing his middle finger to a TV camera during his opening-ceremony performance.

No one is quite sure why the Englishman was so irate, especially considering he was invited to perform despite previously causing outrage in Russia with his song “Party Like a Russian”.

Neymar theatrics
Neymar dominated plenty of the World Cup build-up with his fight to overcome a foot injury, but it was his feigning of injury that saw him become the butt of many jokes.

The Brazilian star showed plenty of his talent, scoring twice as the five-time champions reached the quarter-finals, but consistently play-acted in apparent attempts to have opponents booked or sent off, even having a dive to win a penalty overturned by VAR.

Photographer’s professionalism
AFP photographer Yuri Cortez found himself literally at the centre of Croatia’s celebrations after their winning goal in the semi-final against England, but kept his cool to snap away.

Croatian goalscoring hero Mario Mandzukic helped Cortez to his feet after he became engulfed by the players, while centre-back Domagoj Vida even gave him a kiss on the cheek.