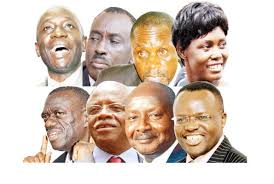 The legal and parliamentary affairs committee plans to invite all former presidential candidates in uganda over the age limit removal bill in article 102 b of the constitution.
Acoording to the chairperson of the committee Jacob Oboth who is also MP for West Budam disclosed that the committee will invite candidates and also interface with former justices of the Supreme Court and 8 political parties and other groups.
All the invited groups and individuals will appear before the committee after it has met the bill’s sponsor Raphael Magyezi of Igara West on 31st of this month.
Oboth says the committee that is expected to consider the bill for 45 days will request the Speaker for more time to accommodate wide consultations before writing and presenting a report to the House.

Oboth alsO said that MPs are secure as they embark on consulting their constituents on the bill that seeks to amend article 102(b) of the constitution that only allows people between 35-75 to can stand for presidency.