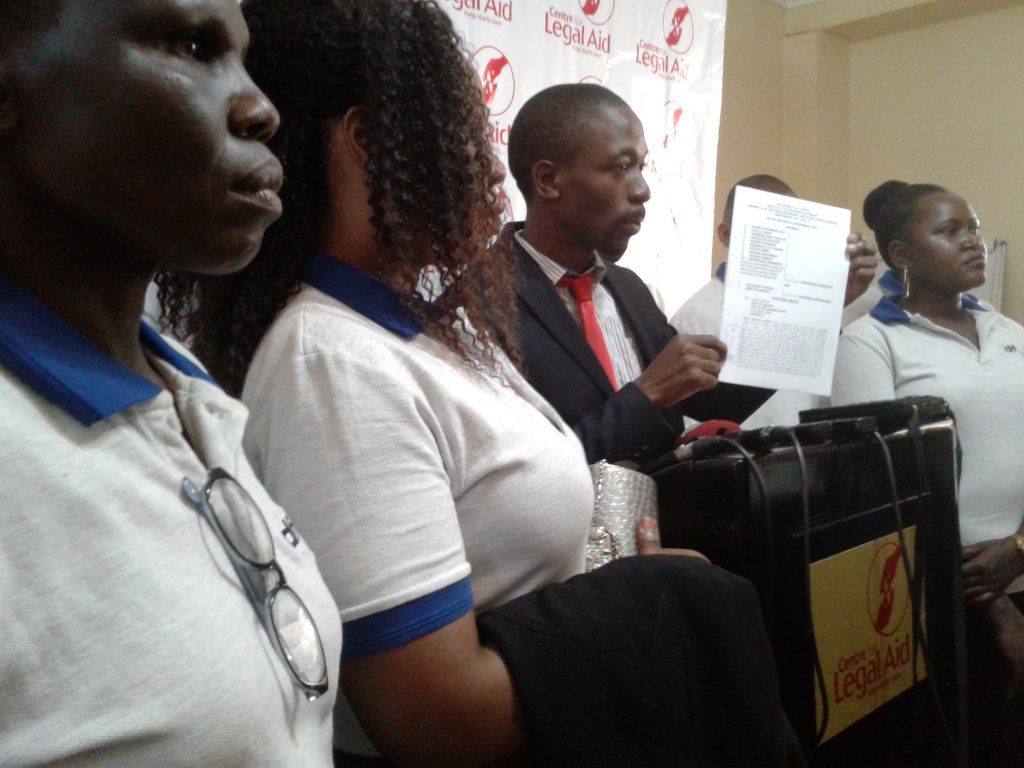 Isaac Ssemakadde (Lawyer) in the center

Former Crane Bank employees have served the central bank governor, Prof. Emmanuel Mutebire with a statutory notice giving him 45 days to answer a claim which details the dismissal of former crane bank employees who were later employed by DFCU bank after it purchased crane bank and warn that if they fail to get a reply, they will go ahead to sue bank of Uganda and DFCU bank.

The central bank announced Crane bank on 20th October 2016 and took over the bank on grounds that it was under capitalized and therefore paused a systemic risk to the stability of the financial system and then BOU transferred the assets of crane bank to DFCU bank.

The takeover saw former crane bank employees laid off their duties after two months by the administration of DFCU without paying compensation, hence bleaching the contract, which is against the law.

They now claim a compensation of UGX.120 million each totaling to UGX.48Bn.

Mark Arinitwe a former branch manager crane bank in Ibanda and Nakilanda Christine (operations manager) former Crane bank reveal the pain they are going through following the dismissal from their duties.

The 400 led by their lawyer, are now ready to sue the central bank governor and DFCU general manager Juma Kisame for illegally laying them off their duties.

The petitioner now say, that the central bank of Uganda is full of roat and mafias who can nolonger manage the country’s financial sector.

However, A section of members of parliament have called for the deputy governor Bank of Uganda Loius kasekende and other officials to step aside to allow the IGG carry out investigations over alleged illicit accumulation of wealth.

This after details from the declaration of income, assets and liabilities forms at IGG link senior Bank of Uganda officials to a number of property in upscale areas of Kampala, Wakiso and other areas.

Addressing a news conference at parliament the Member of Parliament for Nwoya County Simon Oyet and Ngora county mp David Abala said that the implicated group in bank of Uganda should be out so as they do not interfere with the investigations using their position.

Abala said that said that these officials should not fear to be investigated and when are found with no case are cleared.

However ,reports indicate the deputy governor Louis kasekende listed his source of wealth to gratuity payments from the Central Bank, African Development Bank and the World Bank where he has been working.