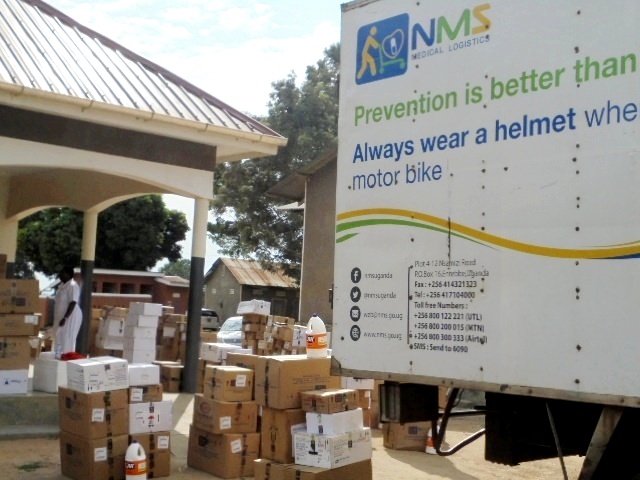 At least eight people including top administrators at Kalisizo hospital in Kyotera district have been interdicted over missing government drugs worth sh19.5m and a refrigerator.

Others are Margaret Nalugembe (Acting Stores In-Charge) and Annet Nakibuuye, the Assistant Inventory Management Officer (AIMO).  Three security personnel including John Mukembe, Kabazi and another were also laid off until further notice.

The staff members (now suspects) were arrested on Tuesday and as of Friday, they were still in custody.

Although they were not caught with the drugs and the said refrigerator, they were responsible in a way that they neglected their duty of monitoring and preventing the items from leaving the store and the hospital premises.

Their trouble bubble burst after a thorough store audit was ordered following the discrepancies of a few (4) drug boxes. Within that process, it was realized the refrigerator, which was donated by a Good Samaritan to keep vaccines and other medicines was also missing.

Quiet investigations have been on since August to establish the clique behind the irregularities. The interdiction happened on September 10, 2019, and the accused stopped working forthwith.

However, senior district authorities kept it top secret not to alarm the public until recently when the information leaked.

But when contacted, Dr. Edward Muwanga, the Kyotera District Health Officer (DHO) confirmed the interdiction saying it was done to crack down on that the rampant theft of government drugs and other items in government health centers, which leave dozens of patients suffering.

He explained that the ill-fated group neglected their duty and paved the way for several irregularities to occur at the hospital.

“It’s true the drugs were missing from the store. During the supervision, the supply officer found some discrepancies on the first four boxes,” he said.

According to Muwanga, the matter was brought to the attention of the Medical superintendent and hospital administration and a case reported to Kalisizo police station for investigations.

An emergency meeting was convened at the hospital for a solution. The hospital administrators, store managers, medical superintendent, and other staff members attended.

“It was established that the store managers and administration had a copy of the main store key. However, having sampled the four boxes with discrepancies, the meeting resolved to audit the whole store,” he said.

At the hospital, the drugs are kept in three different stores which are supervised by stores personnel and these are the main store, laboratory supplies store and HIV supplies store.

Fred Kalyesubula, the Kyotera Chief Administrative Officer (CAO) effected the interdiction. In the interdiction letters dated September 10, 2019, it is explained that the implicated staff members are responsible for the loss of a refrigerator and government drugs at the hospital.

Patrick Kisekulo, the Kyotera District Chairperson, could not divulge much into the matter saying officials from the State House Health Monitoring Unit had also intervened for further investigations along with police and other probe committees.

Rtd. Maj. David Matovu, the Kyotera Resident District Commissioner (RDC), said that they have been monitoring are to monitor all health centers to ensure proper distribution of the drugs.

He explained that government drugs disappeared due to recklessness of the managers which has caused a loss to the hospital.

“We wanted the delivered drugs to sustain the hospital for some time until another consignment is delivered. Similar operations will be effected to root out the lazy departmental heads,” he said.

According to one of the probing officers, they established that there was no sign of store breaking since all padlocks were intact. This meant that whoever took the drugs may have had access to the store keys.

“Another anomaly the investigations discovered was that there wasn’t any requisition schedule displayed on the store and the wards yet the Class A drugs were being issued by the non-Pharmacy Staff which posed questions in the face of the inquisitive officers,” the staff recounted.

In August, an 8-member committee chaired by Moses Walijjo was instituted following the concerns of a missing assortment of drugs.

A committee member, who preferred anonymity, said that in their report to the DHO, they recommended the hospital security be reinforced and advised that police officers be recruited to guard the premises.

The further advised that the padlocks on the main store be changed with immediate effect and the keys be left under the custody of the stores In-Charge.

More still, they emphasized on security cameras installation in all departments that contain valuable commodities mainly drugs. In addition, Authorised personnel should be allowed to access the store

“The cameras will help to monitor the main drug store and stem illegal activities. We also want the store managers to be re-oriented in the different aspects for proper stores management,” he said.

As of Friday, police in Kalisizo had made more arrests more people in connection with the missing fridge.

These include Wasswa Lubega, in –charge cold-chain and Charles Muhumuza, who is said to have taken the refrigerator for fixing but instead he disappeared without a trace.

Another person only identified as Nyanzi was arrested to aid ongoing investigations. Still, police is questioning all suspects about a Flat-screen TV set which also disappeared in thin air last year.

Kalisizo Police CID Evelyn Anyango could reveal details of the matter under investigations.

The accused have since maintained their innocence claiming they are being witch-hunted over unknown reason.

Bantubalamu (Deputy Hospital Administrator) and Nakanwagi (Medical Superintendent) denied any connivance and involvement in any irregularities.

According to Bantubalamu, they have maintained their reputation for a long time up to date.

In the meantime, the district health authorities lay in wait for a comprehensive report of the ongoing police investigations to take the next step.