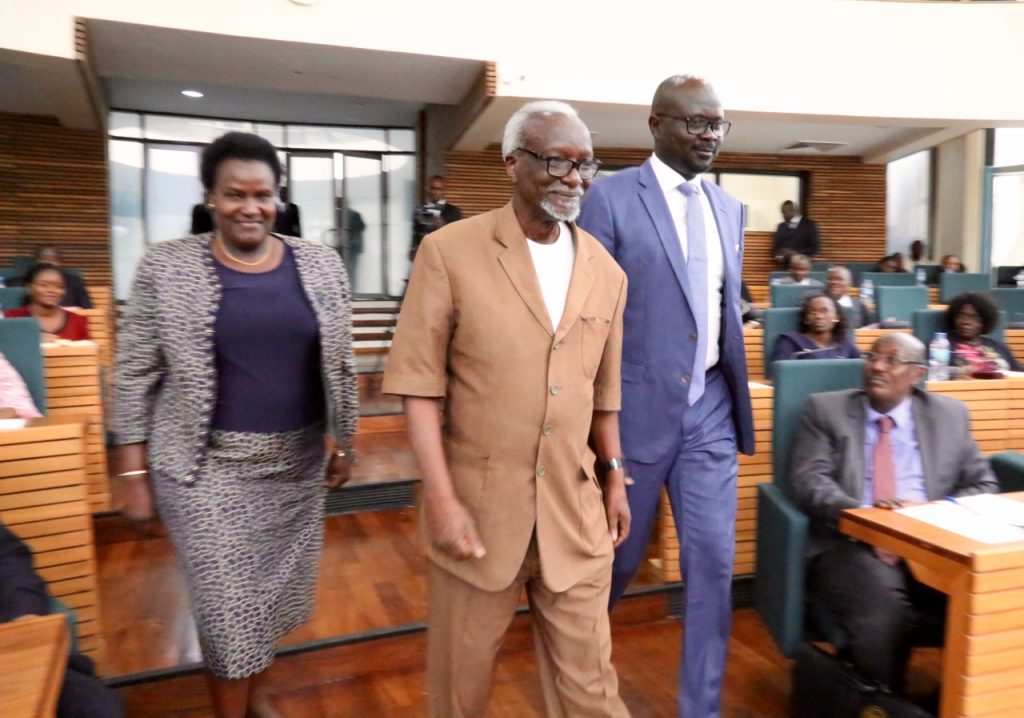 Two senior Ministers in the region were this afternoon sworn in as ex-Officio Members of EALA. Uganda’s 2nd Deputy Prime Minister and Minister for EAC Affairs, Republic of Uganda, Rt Hon Dr Ali Kirunda Kivejinja and the Cabinet Secretary for EAC and Northern Corridor Development in Kenya, Hon Peter Gatirau Munya, took the oath administered by the Clerk of EALA, before the EALA Speaker, Rt. Hon Ngoga K.Martin.

First to take the Oath of Allegiance was the Cabinet Secretary for East African Community and Northern Corridor Development in the Republic of Kenya, Hon Peter Gatirau Munya. The Cabinet Secretary was ushered into the House by Hon Mpuru Aburi and Hon Abdikadir Aden.

Hon Peter Gatirau Munya was sworn in as Cabinet Secretary for EAC and Northern Corridor in the Republic of Kenya on February 16th, 2018 following his appointment by H.E. Uhuru Kenyatta. Prior to his appointment as Cabinet Secretary, Hon Munya served as the first Governor of Meru County, where he was credited with many firsts among them, encouraging investment in sectors providing stable market to the local farming, creating employment and provision of vital services to the local business community.

As Governor, Hon Munya also served as the second Chairman of the Council of Governors. He previously served as a Member of Parliament for Tigania East Constituency in Meru County (2002-2007) and as Leader of the Party of National Unity (PNU). In December 2007 while serving in his second term as MP, Hon. Peter Gatirau Munya was appointed the Assistant Minister, East African Community, where he called for expansion of roads, improvement of existing harbours and building of new ports.

On his part, Hon Dr Ali Kirunda Kivejinja was led in by Hon George Odongo and Hon Rose Akol. He was appointed to cabinet by H.E. President Yoweri Kaguta Museveni in November 2015 and then re-appointed in June 2016 following the elections in the country.

Rt Hon Kivejinja has served in several positions in the Government of the Republic of Uganda. In 1986, he was appointed Minister of Relief and Social Rehabilitation. He has also since served as Minister of Internal Affairs. Rt. Hon Dr Kivenjinja, who holds a MSc in Zoology has been Senior Presidential Advisor for Internal Affairs to President Museveni.

Rt Hon Dr Kivejinja, who has also served as the head of the Veterans’ League of the ruling NRM, is also author of Uganda: The Crisis of Confidence, a book about Uganda’s political history. The Minister of State for EAC, Uganda, is Hon Julius Wandera who according to Article 48 of the Treaty may participate in the Sittings in absence of Rt. Hon Dr Kivejinja.

EALA Speaker, Rt Hon Ngoga K. Martin, hailed the swearing in of both Ministers and said EALA and the region stood to benefit a great deal from their experiences.

The Sitting today was also attended by legislators from the Republic of Kenya and Uganda who are currently in Arusha familiarizing with the activities of EALA and deepening the relationship with the National Parliaments.  Kenya’s Regional Integration Committee is headed by Senator Janet Ongera while Hon Hood Katuramu leads the Committee on Commission, Statutory Committees and Public Enterprises (COSASE) from Parliament of Uganda.