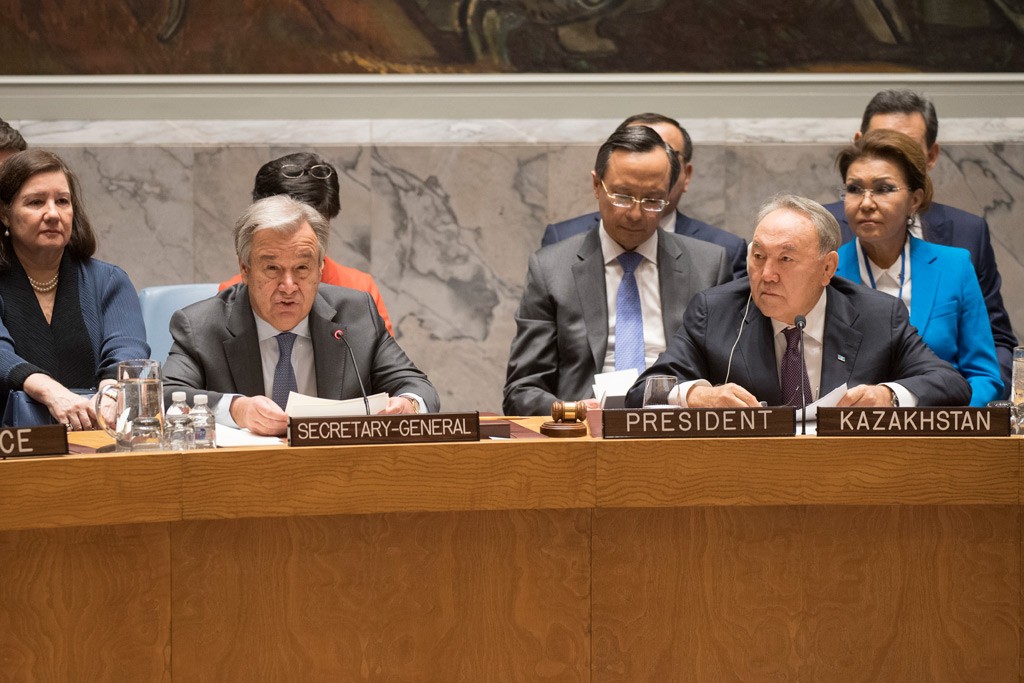 18 January 2018 – Worldwide concerns over nuclear weapons are the highest they have been since the Cold War, United Nations Secretary-GeneralAntónio Guterres said Thursday, calling for comprehensive political solutions that include dialogue and negotiation to prevent, mitigate and resolve conflicts.

However, warning that confidence can be undermined by “bellicose rhetoric, confrontational approaches, the absence of communication channels, and inflexible positions,” Mr. Guterres underscored the importance of effective verification mechanisms.

“From the ground-breaking verification protocols of the Strategic Arms Reduction Treaty, to the invaluable work undertaken by the International Atomic Energy Agency (IAEA) and the Organisation for the Prohibition of Chemical Weapons (OPCW), verification builds confidence,” he said.

In his remarks, the Secretary-General also expressed his belief that UN can play a central role in assisting its Member States to develop, augment and support confidence-building measures and that its position as an “honest broker” allows it to serve as a venue in which all parties can engage in dialogue.

“Going forward, the Security Council, in particular, can provide leadership by demonstrating unity and continuing to highlight the importance of dialogue and diplomacy as an essential means for building confidence,” he said, adding that a measure all Member States can undertake is the universal and complete implementation of all disarmament and non-proliferation obligations.

Mr. Guterres went on to welcome the reopening of inter-Korean communication channels, especially the military-to-military one, and said that it is critical to lower the risk of miscalculation or misunderstanding and to reduce tensions.

“I am also encouraged by the decision of the Democratic People’s Republic of Korea (DPRK) to participate in the upcoming Winter Olympics in the Republic of Korea,” he said, calling for expansion of diplomatic efforts to achieve the peaceful denuclearization of the Korean Peninsula.

At the same time, he added, that the firm decisions the Security Council taken in response to nuclear tests and ballistic missile launches by the DPRK in defiance of Council resolutions must be fully implemented.

Unity within the Security Council vital

The UN chief also highlighted the importance of the Joint Comprehensive Plan of Action (JCPOA) on the Iranian nuclear programme and said that multilateral agreement, which is in the interest of the Iranian people and the international community at large, should be preserved.

“Without such an avenue, we are allowing the use of chemical weapons to take place with impunity,” he stressed urging for unity within the Security Council on the issue.

The Security Council meeting today on the theme ofnon-proliferation of weapons of mass destruction: confidence-building measures was convened by Kazakhstan in its capacity as the President of the Security Council for the month of January.