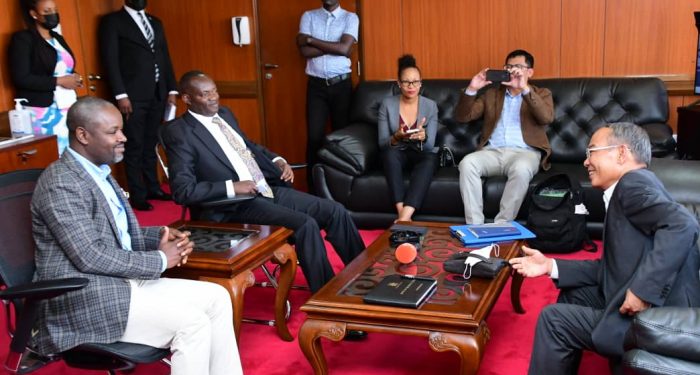 The Vietnamese Ambassador-designate to Uganda, Nguyen Nam Tien, has held bilateral discussions with the Deputy Speaker of Parliament Thomas Tayebwa aimed at bolstering commercial ties between Uganda and Hanoi.

The meeting also attended by King Caesar Mulenga, the Honorary Consul of Socialist Republic of Vietnam to Uganda, discussed key among others, commercial ties with the Deputy Speaker—zeroing coffee export and value addition.

Tien who praised Uganda’s weather said he seeks stronger cooperation between the governments of the two countries.

He said the two countries will soon be celebrating 50 years of cooperation and it will be a great opportunity to revitalize the relations between two nations.

The fresh cooperation would focus on areas of investment, finances and institutional reforms, according to Tien, who Wil present his credentials to President Museveni on Tuesday afternoon at State House, Nakasero in Kampala.

On his part, Tayebwa hailed Mulenga for doing a great job of linking Uganda and Vietnam.

“We call him (Mulenga) a Vietnamese. He has been calling me, inviting me to Vietnam. I will go there in October,” Tayebwa said.

“Records show that the coffee producing countries do not share more than 25% of the income that comes from the coffee industry. The countries which do not produce coffee are the ones benefiting most.”

“We need to work and strengthen our relations as producers of coffee so that we can demand for more for the sake of our farmers and also developing our economies.”

Mulenga, the Honorary consul of Vietnam in Uganda, said Uganda and Vietnam have always enjoyed good relations for the last 50 years and noted that the recent opening of a Honorary Consulate in Uganda has fostered a better relationship between the two countries.

“For the last 50 years, the two countries have mainly cooperated in agriculture because Vietnam’s economy also depends on farming, and it has really developed to modernization, something Uganda should pick,” he commented

He emphasized that Uganda is now targeting commercial Diplomacy and promoting trade, investment and tourism.

Mulenga, however, noted that this collaboration should be strengthened even more by signing a Memorandum of Understanding on defense, information and communications technology, trade, investment and commerce because the two countries need each other equally in these sectors.

Since assuming the role 2017, Ceasor Mulenga has helped Ugandans especially the business community to benefit from tapping into the opportunities Vietnam offers.

Mulenga has also encouraged Vietnamese investors to come to Uganda and invest in Agro businesses, health, education and the tourism sectors.

Vietnam is known to have experienced an increase in coffee exports from less than 2 million bags in 1991 to 27.5 million bags per year, making the Coffee sub-sector in Vietnam worth US Dollars 3.6 Billion.

As a crucial component of meeting its middle-income strategy, the Ugandan government wants to increase annual production four-fold to 20 million bags by 2025.

At $400 million annually, coffee remains the country’s biggest agricultural export, but the sector is marred by widespread backward farming methods which have prevented higher productivity and better quality.

Today the coffee industry in Uganda is dominated by a large number of smallholder farmers, each with about 0.5 – 2.5 hectares of land. It’s estimated that about 1.7 million households are engaged in coffee production.

In 2010 this amounted to a total of around 182,875 hectares under production, compared to 549,100 hectares in Vietnam. Middlemen are needed to collect the small quantities of coffee produced by the multitude of farmers.

Like Uganda, 85%-90% of the coffee in Vietnam is produced by smallholder farmers, who had 670,000 hectares of agricultural land under coffee production in 2015.

Today, Vietnam is the second largest coffee producer after Brazil, producing 27.5 million bags of coffee in the 2015/16planting season. Since 2007, coffee has become the country’s second largest source of export revenue.

Coffee was first introduced to Vietnam in 1857.

It took until 1989 for increased production and regular trade in coffee to take off.

Like Uganda, the increase in Vietnamese coffee production also followed the implementation of policies and reforms that liberalised the sector.

For example, reform of land administration meant stronger property rights, allowing individual producers to own the titles to their land.

In addition, progressive dismantling of state-owned enterprises broke up the monopoly on agricultural trade.

And Vietnam put in place a number of interventions to address productivity levels.

This resulted in Vietnam’s agricultural production being far more capital and input intensive than Uganda’s resulting in higher yields per hectare.

For example, in the 2005/2006 planting season, Vietnam had 257 tractors per square kilometre of arable land, compared to Uganda’s 9.

Equally important is fertiliser use. For the years that data is available, it appears that Vietnam was using 300 times more fertiliser than Uganda, per hectare of arable land. Fertiliser use has a significant impact on the yield per hectare.

For its part, Ugandan productivity has been poor.

Uganda’s 2008 agricultural census shows that the yield gap from low input use in the coffee sector amounts to 2734kg/hectare.

Japan gives UNICEF US$1.5 million to improve the tracking of under-immunized and unimmunized children. Funds will be used to implement...