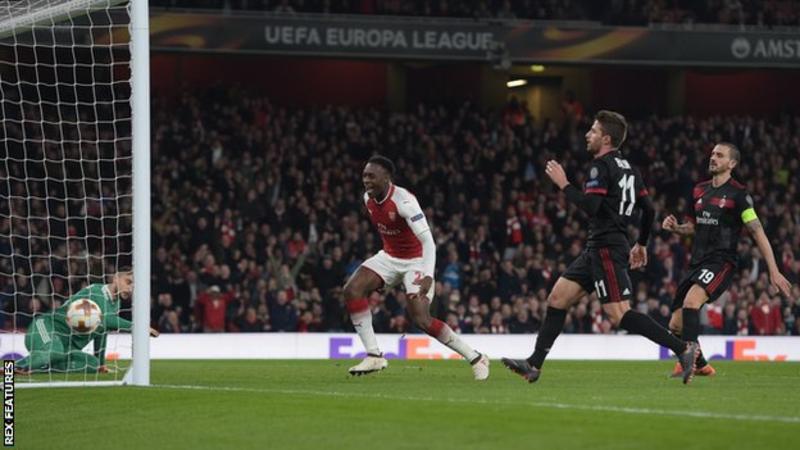 Leading 2-0 from the first leg in the San Siro, the Gunners fell behind on the night when Hakan Calhanoglu produced a wonderful finish from 30 yards after being allowed to run unchallenged.

Arsenal quickly levelled, though, from a controversially awarded penalty – Welbeck going down under minimal contact from Ricardo Rodriguez before scoring from the spot.

Victory meant Arsenal reached a European quarter-final for the first time since 2010.

They will learn their last-eight opponents when the draw takes place on Friday from 12:00 GMT.

Milan’s players and fans were visibly – and probably justifiably – angered by the decision to award Arsenal a penalty in the closing stages of the first half.

Rodriguez appeared to do no more than brush Welbeck’s shoulder, and the former Manchester United player fell to the floor.

The officials were in no doubt a foul had been committed, and a penalty was awarded.

Welbeck, hours after being called into the international squad for friendlies against the Netherlands and Italy, sent Donnarumma the wrong way for his first goal since 7 January.

With Arsenal 12 points adrift of fourth place in the Premier League, winning the Europa League appears to be their best chance of qualifying for next season’s Champions League.

If they are to do that, they will need more goals from Welbeck, particularly as January signing Pierre-Emerick Aubameyang is cup-tied.

And the 27-year-old’s confidence certainly surged after his seventh goal of the season for club and country.

His clever cutback presented Henrikh Mkhitaryan with a great chance just before half-time, but the Armenian headed wide.

In an entertaining game, Xhaka gave Arsenal the lead on the night courtesy after a mistake by Donnarumma, before Welbeck nodded home the third after Aaron Ramsey’s point-blank header was kept out.

Ten years ago, Milan were Champions League winners. They have a long way to go before they can class themselves as European heavyweights once again.

The Rossoneri spent £201.5m last summer, buying an entire team in an effort to lift this fallen giant back to its feet.

But they are 27 points behind leaders Juventus in Serie A and limped out of the Europa League after missing a string of chances.

It could have been different had Andre Silva hit the target instead of the side netting after just 45 seconds.

Milan were much more adventurous than the first leg, though they had former Liverpool forward Fabio Borini at right-back.

At 1-1, Milan continued to waste chances.

Patrick Crutrone fired wide with David Ospina rooted to the spot, while substitute Nikola Kalinic, a former Blackburn player, missed another opportunity with a tame header.

Gennaro Gattuso’s side can still end the season with a trophy – they face Juventus in the Coppa Italia final on 9 May – but will have to do a lot more spending before they are a force again.

Arsenal have a break of more than two weeks before their Premier League match against Stoke City at the Emirates on 1 April (13:30 GMT).

AC Milan go in search of a fifth successive win in Serie A when they host struggling Chievo on Sunday (14:00 GMT).