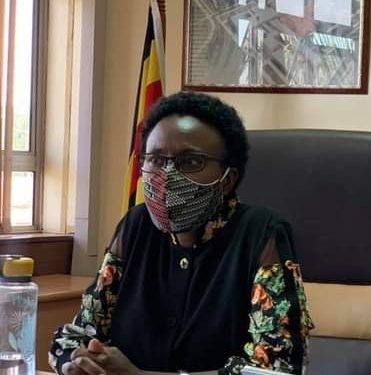 Dr. Jane Ruth Aceng, the Minister of Health, says in one year, over 14 million people have received the first dose of COVID-19 vaccines. Of these, 7.9 million have been fully vaccinated while 20,758 have received booster doses.
Ministry of Health Permanent Secretary Dr Diana Atwine, alongside other health workers during the launch of Accelerated Covid-19 Vaccination in Kalangala.

The Ministry of Health says  7.9 million people have been fully vaccinated since last year.

But as the country received more COVID-19 doses, the exercise was opened to the general public.

Dr. Jane Ruth Aceng, the Minister of Health, says in one year, over 14 million people have received the first dose of COVID-19 vaccines. Of these, 7.9 million have been fully vaccinated while 20,758 have received booster doses.

Dr Aceng revealed the figures after receiving 2,944,800 doses of the one-shot Johnson and Johnson vaccine on Wednesday. The doses were donated by Spain (1,951,200 doses) France (950,000 doses) , Norway that gave 43,200 doses. They made the  donation through COVAX, the global vaccine sharing facility.

The Health Minister noted that the arrival of the additional doses is “a step forward in minimizing the spread and effects of CVOVID-19.”

Dr. Aceng received the latest batch of donations at the head offices of National Medical Stores-NMS in Entebbe.

Jaime Fernandez-Rua, the  Charge d’ affaires’ Embassy of Spain in Kenya, while handing over the donated doses of Johnson and Johnson to the Ugandan government said his country will donate 55 million COVID-19 doses early this year. 25 million doses will be delivered to various African countries. He added that Spain is against inequality in vaccine distribution across the globe.

Moses Kamabare, the General Manager at NMS,  says this is the second time Spain is donating vaccine doses to Uganda. It’s first batch of 1,236,000 doses of Moderna arrived last December while France has donated several doses of AstraZeneca Johnson and Johnson vaccines.

Kamabare says NMS will distribute the latest batch of Johnson and Johnson vaccine doses to different health centres with guidance from the health ministry.

Johnson and Johnson vaccine doses have been distributed mainly in hard to reach areas such as islands namely Kalangala.

The government wants to make vaccination mandatory as proposed in the Public Health Act, Public Health (Amendment) Bill, 2021. Failure to comply atrracts a fine of shillings 4 million or jail term of six months.

This after the country’s efforts to vaccinate half of its population of about 45 million people and also enforce  no jab no entry mandates  in certain areas such as public transport has been largely unsuccessful.

Poor uptake of vaccines has resulted in the expiry of several doses since last year including the latest batch of 400,000 doses destroyed this January.

Parliament is currently scrutinising the Bill, with ministry of health officials justifying the need for vaccine mandates and some individuals and organisations such as Uganda Law Society – ULS opposing the proposal.  ULS says there is need for the public to consent to mandatory vaccination and that exceptions should be given for those with certain health reasons among other considerations.