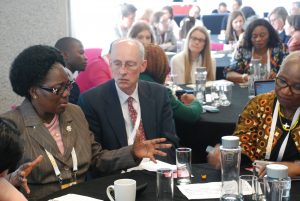 The Speaker of Parliament, Rebecca Kadaga, has called on Heads of State of the Commonwealth Member Countries to suggest a way forward on protection of the rights of women and girls especially in developing countries.

“For CHOGM 2019, the Heads of State should be asked to report among themselves on how far they have gone with combatting violence and achieving SDGs,” Kadaga said.

The meeting under the theme, ’Eliminating harmful practices: child and early forced marriage and female genital mutilation’ raised concern from women activists from countries where prevalence is very high.

Kadaga told the meeting that there was an urgent need to set up cross-border strategies especially in sub-Saharan Africa to limit crossovers by perpetrators of female genital mutilation.

“Nobody is taking interest on the continent. They talk about it but I have never heard the African Union speak about Female Genital Mutilation on the continent yet more than half the countries that practice it are in Africa,” said Kadaga.

Presenters at the meeting noted that it was necessary to involve the family and community at large in the fight against FGM and early child marriages, adding that political will and apt legislation would go a long way in achieving success.

Also on the agenda was the involvement of women in leadership and electoral positions which participants cited as far from success given that many societies had not embraced emancipation of women as yet.

“Our laws are not specific on violence against women. They deal with disruption of elections at polling stations but not with actual violence that goes on in homes and against female candidates,” Kadaga said.

She also made mention of the perennial issue of education where so many children were out of school and commended governments like Ghana and Sierra Leone for committing to free quality education for 12 years.