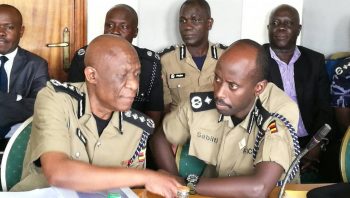 The Inspector General of Police Martin Okoth Ochola has described Muhammad Kirumira, the former Buyende District Police Commander as an officer lacking discipline. Okoth said that Kirumira’s conduct is unbecoming and “actually requires him to be tried in hell.”

Ochola made the statement during a meeting with members of the defense committee of Parliament today. He said that the officer had been given a benefit of doubt, but he continues to take advantage of media presence to become comical.

Ochola’s remarks came after Kalungu West MP Joseph Ssewungu questioned the running battles involving police and journalists during the ongoing trial in which Kirumira is accused of corruption, neglect of duty and unlawful use of excessive authority. He is said to have committed the offences during his tenure as the Officer in Charge of Nansana and Old Kampala Police stations in 2013 and 2014 respectively.

The daring police officer was dragged before the court in February 2018 for alleged torture, extortion, bribery, corruption, neglect of duty, unlawful arrests, excessive use of authority, and discreditable or irregular conduct.

On several occasions, Kirumira has shown outrage at the court decision to throw journalists out of the sessions. On the last appearance early this week, he forcibly led a number of journalists into the court sitting in which the police tribunal was due to deliver judgment on the three cases. When Police insisted on sending them out, Kirumira equally walked out in protest, saying he could not be tried ‘in darkness’

IGP Ochola says that although the beating of journalists is regrettable, Kirumira cannot be left to behave the same way. He says barring members of the public and the press from covering court sessions is not against the law.