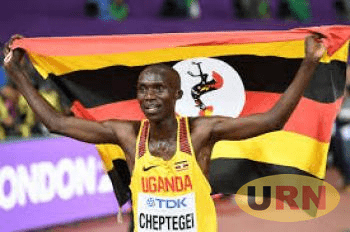 By URN.
Uganda’s Joshua Kiprui Cheptegei has won a gold medal in the 5,000m final of the 2018 Gold Coast Commonwealth Games in Australia.

Cheptegei registered a time of 13:50.83 ahead of Canada’s Mohammed Ahmed who came second with a time of 13:52.78 at the Carrara Stadium Track on Sunday morning.

The other two Ugandans in the race Thomas Ayeko and Phillip Kipyeko finished fourth and sixth respectively.

“This is a very good performance by Cheptegei and we are proud he kept his word,” Timothy Masaba, the administrator at the Uganda Athletics Federation (UAF) told URN.

Cheptegei, the World 10,000m silver medalist was Uganda’s medal hopefuls at the Games in the absence of 2012 London Olympic marathon gold medalist Stephen Kiprotich and Moses Kipsiro who won gold at the 2014 Commonwealth Games in Scotland.

Cheptegei’s good show in Australia can be attributed to his good start in the 2018 season when he won Cross Internacional de Itálica in Santiponce on the outskirts of the Spanish city of Seville in January and also took part in 1500m race at the Athletix Grand Prix 1 in South Africa.